Rohit Sharma delivered in the crucial encounter, scoring a 126-ball 137.

Melbourne: After scoring his second century at the iconic Melbourne Cricket Ground (MCG) on Thursday, Indian opener Rohit Sharma said he wanted to make this innings count at the grand stage.

Aided by Rohit’s 137, the defending champions put up a challenging total of 302 for six against Bangladesh in the ICC Cricket World Cup 2015 quarter-final. Bangladesh were bowled out for 193 runs in 45 overs. Read: India vs Bangladesh ICC World Cup 2015 Highlights

“It is the World Cup quarter-final, so I wanted to make it count. I am glad we eventually posted a good total and now it is important to come back and defend,” Rohit had said during the mid-innings break.

The Mumbaikar was slow to start with but gathered momentum in the middle. He kept clobbering the bowlers all around the park to smash 14 boundaries and three huge sixes in his 126-ball innings.

“It was important for me stay at the crease, especially knowing we lost a few wickets in the middle,” he said, after scoring his seventh One-Day International (ODI) ton. Top 10 batsmen in ICC Cricket World Cup 2015

“We knew it [pitch] would be slow and low, so I wanted to take my time. I knew if I could stay till the 35th over I could make it count.”

The 27-year-old added that it became easier batting on the strip after the short rain delay in the 39th over. Top 10 bowlers in ICC Cricket World Cup 2015

“After the rain, the ball came on nicely. It was important to hold your shape and then play your shots,” he said.

India then came out to bowl and eventually bundled out Bangladesh for 193, clinching the knock-out encounter by 109 runs.

“Bowlers are taking wickets and the batsmen are scoring runs. We just need to take this momentum into the semis,” said Rohit at the post-match presentation ceremony.ICC Cricket World Cup 2015: SCHEDULE & MATCH DETAILS

The prolific right-hander also stressed on the fact that his team needs to continue doing whatever it was up to for the last few matches.

“We just need to do what we’ve been doing. We are doing the right things on the field. When it comes to batting, we are creating big partnerships and bowlers are bowling well in tandem and taking wickets, which is very important in any format,” he said.

Speaking on his game-winnings innings, Rohit said it was right up there with his two double hundreds that he has in ODIs.

“I think it will be right up there. It was an important situation where the team needed it the most. I was determined,” he said. ICC Cricket World Cup 2015: Complete Coverage

“I wanted to bat as long as possible and put the team into a good situation and the bowlers then did a fantastic job,” he concluded. 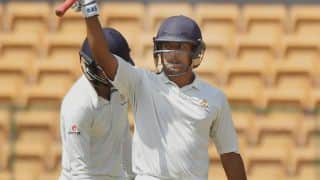