Rohit, has struggled in Australia in the longest format of the game.

Former Australia captain Ian Chappell says that India batsman Rohit Sharma is wasting enormous talent, adding that the batsman is ‘half asleep and in the nets’ while playing in a match.

Chappell told Mid-day, “He’s got to stop batting as though he’s half asleep and in the nets. The most annoying thing is he’s wasting an enormous talent. He gets out so softly all the time. He appears to want it to look like it’s easy but it’s not easy, otherwise a lot more people would be playing Test cricket.”

Despite bad performances, it is unlikely the selectors will exclude Rohit from the playing XI for the remainder of the series and with a little more focus, Rohit can single-handedly turn things around.

Rohit has averaged a poor 20.25 in the last two Tests in Australia, scoring 81 runs in four innings. He squandered couple of chances wherein he could have cashed in, but he has failed to make most of the opportunity. In the ongoing four-match Test series, Australia are leading by 2-0 having won the first two Tests by 48 runs and four wickets respectively.

The third Test begins at the iconic Melbourne Cricket Ground (MCG) from the Boxing Day. 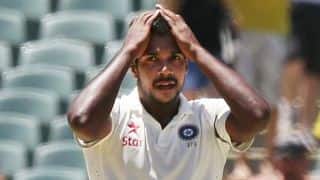 India vs Australia 2014-15: A tale of India's struggle against tailenders in Test cricket