Rohit alone scored 13 runs more that the entire Sri Lankan side put together.

Rohit Sharma’s double century was instrumental in India’s thorough 153-run routing of Sri Lanka in the fourth One-Day International (ODI) at Eden Gardens, Kolkata, on Thursday. Rohit scored a record-shattering 264, while the Sri Lankans folded up for 13 runs less than what he made alone.

Umesh Yadav continued his impressive run, getting rid of Kusal Perera for the third time in three games, once again in the first over of the innings. Dinesh Chandimal was out soon thereafter, driving one from Stuart Binny — who opened the bowling with Umesh — right into the hands of short cover.

Mahela Jayawardene and Tillakaratne Dilshan soon followed as well, and Sri Lanka were staring down the tunnel with a freight train on its way to smash them. From 48 for four, Angelo Mathews and Lahiru Thirimanne put on a useful stand, getting to 166 for five. Mathews scored a fighting fifty, but was later dismissed for a well-compiled 75. Thirimanne too scored a half-century but was out soon thereafter. Thisara Perera hit a few huge sixes off debutant Karn Sharma, but Dhawal Kulkarni came back to clean out the tail. Sri Lanka suffered another collapse, going from 218 for six to 233 for nine. Shaminda Eranga and Ajantha Mendis did their best to get close to Rohit’s individual score, but they still lost the match by 153 runs.

Earlier, Rohit scored his second double hundred in One-Day Internationals (ODIs) to help India score 404 for five. Virat Kohli scored a good 66 in a partnership of 201 runs for the third wicket with Rohit as India piled on the runs against a hapless Sri Lankan attack. Rohit was dropped in the fifth over by Thisara Perera, a miss that cost the visitors dearly.

Ajinkya Rahane had got India off to a great start, scoring 17 runs off his first six balls, including four boundaries. He was finally dismissed for 28 off 24 balls to a dubious call from the umpire. Angelo Mathews’ delivery would perhaps have bounced over the stumps, but Rahane was adjudged LBW. New man Ambati Rayudu scratched about for eight runs, but was then cleaned up by Shaminda Eranga.

That brought Kohli to the middle, and signalled the start of a tremendous period of play for the hosts. Rohit started slowly, taking 72 balls to get to his first fifty. However, he soon opened the floodgates, scoring his next fifty off just 28 deliveries. He then kicked on further, getting to 150 off 125 deliveries. He went absolutely berserk after that, hitting boundaries at will and finding the gaps with consummate ease.

Kohli batted well at the other end, churning over the strike and ensuring that Rohit got plenty of the strike. He scored his 33rd ODI half-century in the process, but was run out soon after, in yet another mix-up with Rohit. Curiously, the pair was also involved in a run out (Kohli was out for a duck in that match) when Rohit scored 209 against Australia.

Rohit entered the 190s in the 44th over, and went on to complete his second ODI double ton off 151 balls. In the process he became the only man in history to score two ODI double centuries. He soon became the man with the highest ODI score after he went past Virender Sehwag’s 219 against West Indies. Rohit and Robin Uthappa put on a 100-run partnership off 48 balls, off which Uthappa’s contribution was 12. Rohit broke records galore, going past Shikhar Dhawan (248) as the Indian with the highest score in List A cricket when he got to his 250. Rohit was finally dismissed off the final delivery of the innings for a record-smashing 264 off 173 balls with 33 fours and nine sixes.

Earlier, Karn Sharma, the right-arm leg-spinner, made his debut for India. Apart from him, Stuart Binny, Robin Uthappa, and Rohit Sharma came back into the Indian side at the cost of Wriddhiman Saha, Ishant Sharma, Shikhar Dhawan, and Ravichandran Ashwin. For Sri Lanka, Ajantha Mendis, Lahiru Thirimanne, Dinesh Chandimal, and Shaminda Eranga made comebacks to the side. 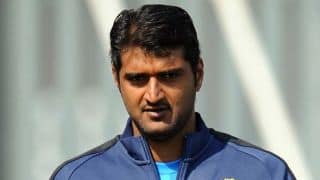