Rohit Sharma tested positive during the 4-Day Warm Up game against Leicestershire. In Case Rohit misses out, Jasprit Bumrah is likely to lead India in the match

Birmingham: India and England are set to lock horns in the rescheduled 5th Test, starting July 1st at Edgbaston Birmingham. Ahead of the match, India was dealt with a massive blow as skipper Rohit Sharma tested positive for COVID-19, putting his participation in the 5th Test in doubt.

Rohit Sharma was part of the 4-Day warm-up game against Leicestershire and batted in the first innings. However, he did not take the field on the final day of the match as he was forced into isolation after testing positive for COVID-19. This was a massive blow for the team as India is already without vice-captain KL Rahul, who was ruled out of the match due to injury. Both Rohit Sharma and KL Rahul played a significant role in giving India a 2-1 lead in the five-match series.

Meanwhile, Rohit Sharma’s daughter Samaira recently provided an update on her father’s health. In a video that’s going viral on social media, the reporters in the UK asked Samaira what her father, Rohit is doing. In response to the queries, Samaira cutely replies that Rohit is sleeping in the room. The adorable video is winning hearts on the internet.

Post Rohit’s positive result, Mayank Agarwal was called in as a backup opener into the squad. In case Rohit Sharma fails to recover in time, Jasprit Bumrah will most likely lead the team in the match, making him the first Indian pacer after Kapil Dev to lead the Test team.

India leads the series 2-1 and a win or a draw will give them their first Test series win on English soil since 2007 when India won the series 1-0 under the leadership of Rahul Dravid. Speaking about England, the Three Lions will come into the match after annihilating New Zealand 3-0 in a three-match Test series. 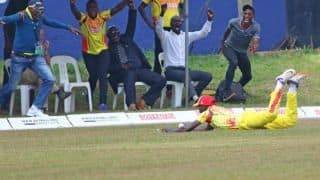 'One Of The Finest Catches You Will Ever See'- Fans In Awe Of This Catch By A 41-year-old cricketer, Watch Video BCCI Scolds Indian Players For Roaming On The UK Streets, Asks Them To Take All COVID-19 Precautions