Virat Kohli completed 1,000 runs in a year for the 9th consecutive time.

India dominated England in the first ODI at Trent Bridge, Nottingham. Chasing 269, India won the match by 8 wickets with 59 balls to spare to take lead in the three-match ODI series. England did manage to pick 2 wickets but failed to create pressure. Rohit Sharma starred with the bat, recording his 18th century. Rohit just carried his form from the last match as he smashed his ton in 82 balls. His knock of 137 from 144 balls included 15 fours and 4 sixes.

Shikhar Dhawan set off from the word go, smashing 40 in 27 balls with 8 fours. He fell to Moeen Ali in the eighth over. Dhawan down the track in pursuit of a big shot but could only slice to Adil Rashid at backward point. However, this was the only high for England for some time.

Virat Kohli had pushed himself to No. 4 in the T20Is, but he came to bat at his regular position today. He played some glorious cover drives as he got to his 47th half century in 55 balls. He played a handy knock of 75 in 82 balls, adding 167 for the third wicket partnership with Rohit. Kohli also completed 1,000 runs in a year for the ninth consecutive time. Kohli fell in the 35th over, stumped off Rashid.

In the first innings, England got to a good star scoring 71 in Powerplay overs. Kuldeep Yadav, with 6 for 25, helped India to bowl England out for 268. His were the best figures by a spinner against England, best figures by left-arm spinner and the fourth-best figures by an Indian. Jos Buttler and Ben Stokes smashed half-centuries and Moeen and Rashid hit out in the end overs.

Man of the match: Kuldeep Yadav. 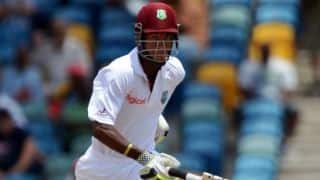