The Ashes winner opined that while Australia are unlikely to change their playing XI for the second Test, at Lord's, London on August 14, England will have a tough decision to make about their playing XI.

Former Australia international Ricky Ponting reckons that England’s batting is quite frail and the likes of Rory Burns, the first Ashes 2019 Test centurion, No.3 Joe Denly, opener Jason Roy and Jos Buttler are ‘not out-and-out world-beaters’.

Speaking to cricket.com.au, the Ashes winner opined that while Australia are unlikely to change their playing XI for the second Test, at Lord’s, London on August 14, England will have a tough decision to make about their playing XI.

“I know Rory Burns got a hundred, but Joe Denly, Jason Roy and even Jos Buttler to a certain degree, they’re not out-and-out world-beaters at Test level, “said Ponting.

“The decision for them is a tough one; do they expose their weakest suit to seaming conditions, or do they prepare something they think will give their batters the best chance?, ” he added. ALSO READ: Rory Burns becomes only the 10th player to bat on all five days of a Test match

Ponting believes that the with nine-day gap between the first and the second Test, Australian quicks – in particular James Pattinson – will have enough rest time to play in the second Test. He also added that with the kind of pitch on offer at Lord’s, Peter Siddle should be a certain starter.

“I know there was talk about managing Pattinson through the series,” said the 44-year-old. ALSO READ: How The Ashes came in to being The history of cricket s oldest and fiercest rivalry

“But with nine days between games and he only bowled eight overs in the second innings, you’d think he’d be fine physically. So there’s an argument to not change the team.

“We know (Glenn) McGrath has a great record at Lord’s and loved bowling there. He used to seam the ball back down the slope because he wasn’t a big swing bowler. The way Sidds is bowling now is actually quite similar to the way McGrath bowled in his last few years. I actually think (the Lord’s slope) will suit all of our bowlers pretty well,” he added. 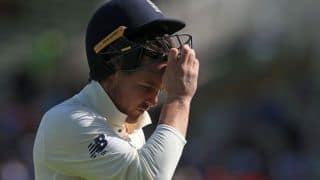