Currently, New Zealand are 66 for the loss of five wickets in 16 over, with Jimmy Neesham on zero, vs India in 5th ODI.

New Zealand batsman Ross Taylor was dismissed for mere 19 by leg-spinner Amit Mishra, after being caught behind by MS Dhoni, while BJ Watling was bowled, against hosts India, in the fifth and final One-Day International (ODI), at the Dr. YS Rajasekhara Reddy ACA-VDCA Cricket Stadium in Visakhapatnam on Saturday. It was a quicker ball from Mishra, as he pitched it outside off, while Taylor went for a cut, but unfortunately found the edge, only to be taken by the keeper. As for Watling, he too was bowled by a quicker one pitched straight onto. Currently, New Zealand are 66 for the loss of five wickets in 16 over, with Jimmy Neesham on zero. FULL CRICKET SCORECARD: India vs New Zealand, 5th ODI at Visakhapatnam

A win followed by a defeat: this has been India s story so far this series (of course, it would be otherwise for New Zealand). The series is levelled 2-2. And the final match is being played at Dr. YS Rajasekhara Reddy ACA-VDCA Cricket Stadium, Visakhapatnam (no, this is not the longest name you d come across). The track had no signs of grass on it. It was considered a featherbed for the batters. As a result, toss was crucial for both the teams. It was apparent that the one who calls right will opt to bat first. For that matter, fortune favoured MS Dhoni. FULL CRICKET UPDATES: India vs New Zealand, 5th ODI at Visakhapatnam 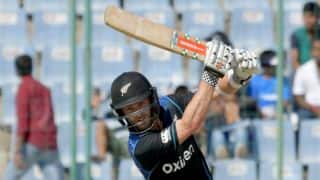