Veteran New Zealand batsman Ross Taylor on Sunday became the first male Kiwi cricketer to play 100 T20Is as he took the field against India in the fifth and final T20I on Sunday. Taylor, 35, joined woman all-rounder Suzie Bates (112) as the only two New Zealanders to have played 100 matches in the shortest format.

Taylor also became only the third male cricketer to have played 100 T20Is for their countries. Shoaib Malik (113) and Rohit Sharma (107) are the only other male players to have played more matches than Taylor.

Taylor will soon look for another record when he plays the first Test of the two-match series against India starting February 21.

By playing his 100th Test in Wellington, Taylor will become the only cricketer in the history of the game to have played 100 games in all three formats.

In the fifth T20I, India choked New Zealand yet again to turn it around for a seven-run win. With this, India registered a rare 5-0 series whitewash in the shortest format over the Kiwis on Sunday.

The Indian pacers, led by ever-reliable Jasprit Bumrah, shared seven wickets among them for 25 runs in match-changing 7.2 overs to restrict the Kiwis to 156 for nine while defending 163 for three. Bumrah conceded just 12 runs in his four overs and got rid of three batsmen, bowling block-hole deliveries during death overs.

India’s total was built around stand-in skipper Rohit Sharma’ 60-run knock after they elected to bat. Tim Seifert (50) and Ross Taylor (53) kept the Black Caps in the hunt for a consolation win but the hosts again fell near the finish line.

This is the only third time that India have whitewashed opponents in away T20 series and the first time in a five-match rubber. India had blanked the West Indies 3-0 in 2019 and beat Australia 3-0 in 2016.

New Zealand got off to a poor start and were quickly reduced to 17 for three in the fourth over. Bumrah had Martin Guptill (2) lbw, and Sundar bowled Colin Munro (15). Tom Bruce’s run-out didn’t help the situation either.

Taylor and Seifert came together at that juncture, putting on 99 runs for the fourth wicket, raising vision of an improbable win. Portable Detector Can Detect Concussion Right on The Cricket Field 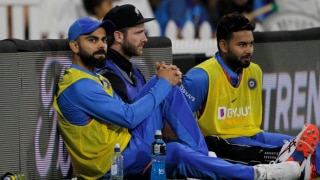 Kane Williamson And I Have Similar Mindsets: Virat Kohli Reveals Chat He Had With New Zealand Captain On Boundary Ropes