Ross Taylor will be available to play with Nottinghamshire till June, which is until the knockouts stage of the Royal London Cup.

Ross Taylor played for Durham in 2010 and for Sussex in 2016 and 2017. He will now play for Nottinghamshire in the Royal London Cup. He will be available to play with Nottinghamshire till June, until the knockouts stage of the tournament. In case Nottinghamshire make it to the final, Taylor is likely to be available then. Taylor s terrific run in the England ODI series has grabbed eyeballs. He started off scoring 113. He strained his thigh in the second ODI and was unavailable for the third. However, he kept the five-match ODI series alive by guiding New Zealand to victory in the fourth by bringing up his career-best ODI score of 181*. Taylor s presence will be a boost for Notts, who will be keen to make good progress in Division One, having earned a promotion after finishing second in Division Two in the previous season.

Taylor speaks: I’m really excited about joining Nottinghamshire as they return to Division One of the Specsavers County Championship, and I hope I can play an important part in helping them become re-established at the higher level. It’s also great to be joining a team who are defending a white ball trophy, with the club having won the Royal London One-Day Cup last summer. I’ve enjoyed playing against England for New Zealand in the early part of this year, and I’m looking forward to testing myself in the early-season English conditions, as quoted by cricbuzz.

Nottinghamshire Director Mick Newell delayed the announcement considering Taylor injured himself during the fourth ODI again: With Ross suffering a recurrence of a previous quad injury in his century for New Zealand against England on Wednesday, we have been monitoring his fitness, which delayed the announcement of the signing by us. But he’s confident that he will be fully fit. Ross is a world-class performer who brings with him an excellent record at the highest level in both red and white ball cricket. He is just what we were looking for to strengthen the top order of our four-day batting line-up. 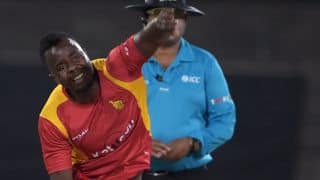