Following New Zealand’s thrilling loss to South Africa at the ICC World T20 2014, Martin Guptill has said that his side should have got Ross Taylor on strike much earlier than they did during that last over. Needing seven off the last over bowled by Dale Steyn, New Zealand lost two wickets and could score only four runs. Taylor was at the other end, batting on 62 and could only face the last ball, off which he was run-out.

Guptill said that New Zealand should have been smarter in their run-chase. “We needed seven off six balls so we should have really won that, we let that one get away. In the next game, if we get into that sort of situation, we’ll need to be a bit smarter in our decision-making and get the guy who’s on 60-odd at the time on strike,” Guptill was quoted by Sydney Morning Herald.

New Zealand have now won one game and lost one in their two games at the World T20 so far. They could have had two, had they knocked those runs off. Australia have to come up with gameplans to tackle Sunil Narine and Samuel Badree: Aaron Finch 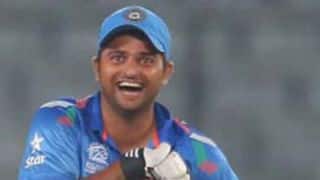