No decision will be made on whether Ross Taylor will play in the second Test starting in Hamilton on Friday until the results of the tests are known.

Senior New Zealand batsman Ross Taylor has vision problems and will see an eye specialist before the second Test against Pakistan, coach Mike Hesson confirmed Sunday. There has been concern about Taylor’s lack of runs in recent Tests and he did not bat in his usual number four spot in the second innings of the first Test against Pakistan in Christchurch, which New Zealand won by eight wickets. Hesson said Taylor had his eyes checked before the start of the match and “it certainly showed he needed to see a specialist. Full Cricket Scorecard, New Zealand vs Pakistan, 1st Test, Christchurch

“It just appears the eyesight has deteriorated. Ross was keen to get it seen to.” No decision will be made on whether Taylor will play in the second Test starting in Hamilton on Friday until the results of the tests are known. The 32-year-old Taylor has an average of 45.95 but has only averaged just over 10 in his last 10 innings, scoring 11 in his only knock against Pakistan. Hesson said Taylor had a check-up six months ago and there were no issues then.

“There’s a growth that’s come across a little bit. It’s been fine for a long time but it’s part and parcel for any human being. You do different tests, you want to make sure things are all in order.”

Despite eyesight concerns, Taylor fielded at first slip throughout the Pakistan Test, taking a catching to dismiss Babar Azam off Colin de Grandhomme in the first innings. 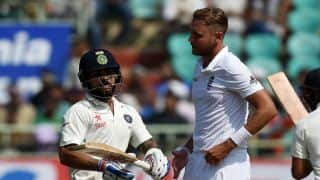