Ross Taylor to play for Sussex in 2016 English County

Ross Taylor to play for Sussex in 2016 English County

Ross Taylor has agreed to play for Sussex for the first half of the 2016 season, the English county announced on Friday.

London: New Zealand batsman Ross Taylor has agreed to play for Sussex for the first half of the 2016 season, the English county announced on Friday. Former Black Caps captain Taylor, who has scored 5,197 runs from his 68 Tests with an average of 45.99, will be available for Sussex in all three formats from the start of next year’s campaign in early April until late July. His signing is a big coup for Sussex, who were relegated from the County Championship First Division earlier this year. The 31-year-old’s move to Hove as an overseas player was facilitated by veteran Australian seamer Steve Magoffin soon qualifying as a local player, with Sussex reporting the process is still in application. Ross Taylor backs Martin Guptill to shine in series against Sri Lanka

Taylor, who has also played 166 one-day and 64 Twenty20 internationals, said: “I am delighted to be joining Sussex in 2016. I’ve heard nothing but positive words said about the set up at Hove and I look forward to contributing across all three forms. Hopefully I can play my part in helping Sussex bounce straight back from the disappointment of relegation last season.” Ross Taylor: Umpiring blunder could have major impact on day-night Test between Australia and New Zealand

Sussex head coach Mark Davis added: “We are thrilled to have acquired the services of Ross Taylor for a large part of the 2016 season. “He is a brilliant all-round player with high skill in all formats of the game. To have secured one of the best batsmen in world cricket is testament to the ambition that we have at Sussex Cricket Limited.”

Earlier, Playing for New Zealand against Australia at Western Australia Cricket Ground (WACA) in the second Test of the 2015-16 series, a resurgent Ross Taylor had already made his way into record books by scoring 290 in the first innings. His 290 is now the highest Test score by any visiting batsman on Australian soil. 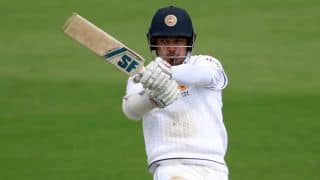