Riding on Ross Taylor s 16th One-Day International (ODI) century, New Zealand posted a total of 281 for 9 against Australia in the third and the final game of the Chappell-Hadlee Trophy 2016-17, at the Seddon Park in Hamilton. Apart from Taylor, opener Dean Brownlie (63) and all-rounder Mitchell Santner (38*) played useful knocks to put their team well in the corridor of 280-run mark. Excluding these three, none others from the Kiwi camp could support their team s cause in this final and the deciding game of the series. For Australia, Mitchell Starc and James Faulkner took 3 wickets each while Josh Hazlewood and Pat Cummins got 2 and 1 respectively.

Opting to bat first, New Zealand had a bad start as Tom Latham (0) disappointed yet again, putting the team in a spot of bother with just 6 runs on the board. But Brownlie and Kane Williamson handled the pressure well. Both these batsmen played sensible and attacking cricket putting up 70 runs for the second wicket off just 71 deliveries. It was Cummins who got rid of well-settled Williamson (37) to end this partnership which saw Taylor coming out to bat. By the time Taylor came to bat, Brownlie had entered his 40s and it only looked a matter of time till he got to his maiden ODI fifty.

Taylor took the game away from the Australia bowlers in no-time. He blasted off every single bowler with ease and perfection mixed with timing and hard-hitting. He accelerated the Kiwi score quickly enough and while doing so, he scored his fifty well before Brownlie who was still lurking in the 40s. FULL CRICKET UPDATES: New Zealand vs Australia, 3rd ODI at Hamilton

Soon enough, Brownlie too got to his fifty and looked to accelerate the scoring and perished while doing so. New Zealand had reached 176 runs on the board for 3 wickets and had a commendable oncoming batting line-up. But Neil Broom (8), Colin Munro (3), Jimmy Neesham (1) departed in quick succession putting the home side in a tight spot with 209 runs for the loss of 6.

Santner, who walked in at No. 8, gave the maximum strike to Taylor who was batting brilliantly at one end despite wickets tumbling at the other. While doing so, he scored his 16th ODI ton equalling the record of Nathan Astle of scoring the most number of hundreds by a New Zealand player in ODIs.

It was towards the ending stage of the game that the Australian bowlers looked daunting on this batting pair with some tight overs. Taylor tried to accelerate the scoring during this time but perished in the process. Santner took charge and made sure that the hosts reached a total of 280 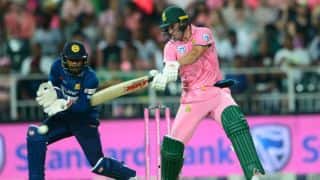 Live Cricket Score, India A vs Bangladesh, Warm-up match Day 1 at Hyderabad: IND A in command at stumps