Rajasthan made4 a dream start with RCB tottering at 11/4.

Rajasthan Royals made a dream start as four wickets were down for 11 runs as Kane Richarson and co ran through the Royal Challengers Bangalore top order.

In what was a surprise move, Shane Watson decided to open the bowling with Stuart Binny and he opened the innings with a wide down the leg side. Yogesh Takawale’s heroics from the last game didn’t last as he nicked the ball to wicketkeeper Sanju Samson for a duck.

There was further drama of the next ball as Virat Kohli nudged the ball to run a quick single but Parthiv was slow and casual with his running and ended up being well short of the crease. Bangalore had got off to the worst possible start. Tim Southee started the second over and Kohli hit the ball down the ground for a single and Yuvraj Singh’s tentative stay at the crease continued with a nervous prod, which took an inside edge of the toe end of his bat and the batsmen crossed over for a single.

The third over started with Kane Richardson steaming in Watson and attacking with two slips and Yuvraj edged it to Steven Smith at second Smith and there was further damage as the prolific Ab de villiers crashed the ball on to the stumps off an inside edge and it was four wickets down in the hut for five runs. Sachin Rana though negated Kane Richardson’s hat-trick ball by running the ball down to third man. Kohli, unperturbed drove Richardson for a four. 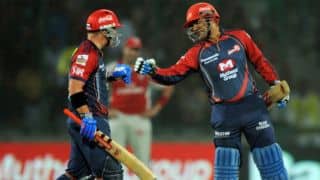 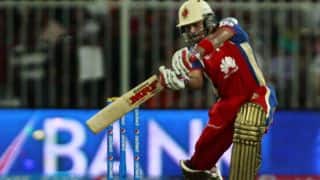