In six overs, Bangalore are 34 for three.

Chennai Super Kings have taken three early wickets against Royal Challengers Bangalore in their Indian Premier League (IPL) 2014 match at Bangalore. After losing Rilee Rossouw early, Bangalore lost Vijay Zol and Yogesh Takawale. Virat Kohi is still out there and in six over, Bangalore are 34 for three. Yuvraj Singh as joined Kohli in the centre.

In the fourth over bowled by Samuel Badree, Takawale smashed three boundaries. Two were swept and one was pulled to long-on, where Mohit Sharma fumbled and it crossed the boundary. Later, Ravichandran Ashwin came for the fifth over and he trapped Takawale leg-before as he came from round the wicket. Mohit then came on to bowl the sixth over. Zol lofted him first ball over mid-off, and got two for it. And then Zol was bowled as he tried to go over the top and missed it.

Earlier, Chennai won the toss and chose to bowl first. They made a few changes to the side with Badree and Nehra coming in. Bangalore also made changes, as many as four in number. Chris Gayle was dropped from the side for this match. 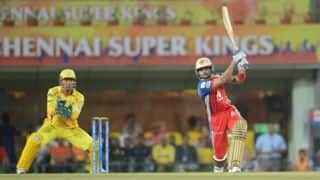 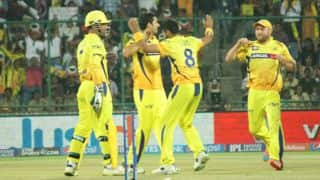