Royal Challengers Bangalore (RCB) restricted the Rajasthan Royals (RR) to a modest total of 130 for nine in their allotted 20 overs, in their Indian Premier League (IPL) 2015 Match No. 22 at Ahmedabad on Friday.

Rajasthan Royals squandered a positive start provided by their openers and it turned out to be a bad day for them with  the bat, as none of their frontline batsmen could make a mark. Steven Smith was the only one who went past 30-run mark while the others struggled.

Earlier in the innings, Shane Watson and Ajinkya Rahane started off with tremendous ease. Mitchell Starc got some movement early on but Watson smashed a four in the first over to make his intentions clear. Live Cricket Score, Rajasthan Royals vs Royal Challengers Bangalore, IPL 2015, Match 22 at Ahmedabad

Rahane was a little edgy as always but he slammed a six on the first ball off Iqbal Abdullah and then a four in the third over to get going. The Rajasthan openers did well to thwart the initial pressure and started to hit the RCB bowlers around the park.

Watson followed Rahane soon, as he got carried away as after hitting Yuzvendra Chahal for a massive six, he ended up giving a straight catch to Starc at deep midwicket for 26. Watson faced 22 balls and struck four boundaries and a six.

Steven Smith and Karun Nair weathered the storm for some time, as the slowly began the rebuild work for Rajasthan Royals. Nair looked good till the time he was run out in the 10th over, as smart work from Virat Kohli ended his stay at the crease.

Royal Challengers Bangalore (RCB) continued to make inroads, as in the 12th over Deepak Hooda failed to read a straight delivery from Abdullah and was cleaned up. The big-hitting batsman failed to make a mark as he was cleaned up after three-ball one.

Hooda’s wicket brought Sanju Samson at the crease, and the right-handed young cricketer too was dismissed in the same passion. Chahal bowled one inviting Samson to go for his shot, but the batsman missed completely and the ball crashed in to the middle stump. Samson fell after facing seven balls and scoring seven runs.

The regular wickets implied pressure on the Rajasthan side, as they had to resort to taking singles and doubles and quick runs dried up. Stuart Binny played a couple of big strokes which also included switch hits, but Rajasthan could not get the momentum they needed.

Starc came back in the 18th over and he had Steven Smith caught behind on a delivery which was wide and meant to be hit. Smith, who lost control on the stroke was so livid that he yelled at himself while walking back. In the same over, Binny fell on the fourth ball as he was caught deep in the cover region, looking to clear one off Starc.

Rajasthan’s day was summed up when Dinesh Karthik moved across on the left side and and took a splendid one-handed catch behind the wickets to get rid of the dangerous James Faulkner in the second last over. Faulkner had tried to scoop the ball on the leg side past the wicketkeeper, but Karthik proved too smart for the batsman.

For Royal Challengers Bangalore’s bowlers, it was an excellent outing as three of them claimed two or more wickets. Starc claimed three while  Chahal and Patel were the pick among the bowlers with two wickets apiece. 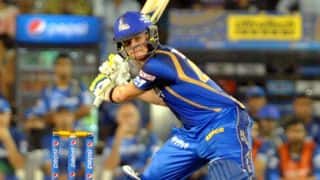 IPL 2015: Mumbai Indians vs Sunrisers Hyderabad clash to be witnessed by 17,000 underprivileged children