Catch all the live updates of IPL 2016 player auction for Royal Challengers Bangalore team as and when they buy players.

Good Morning! Hello and Welcome to CricketCountry’s live coverage of Indian Premier League (IPL) 2016 player auction. We, at CricketCountry will be presenting you with the live updates from the player auction for the Royal Challengers Bangalore (RCB) franchise for the ninth edition of IPL. RCB are owned by United Breweries (UB) group, more specific to Vijay Mallya with his son Sidhartha Mallya acting as the Director of the team. RCB play their home games at M Chinnaswamy Stadium in Bangalore. Currently RCB are skipper by India’s Test captain Virat Kolhi and coached by former player and New Zealand skipper Daniel Vettori with South Africa’s ‘White Lighting’ Allan Donald to support him as bowling coach. RCB coming into the auction have a kitty of Rs. 21,62,50,000  to play around with. Live Updates & Blog, IPL 2016 Auction: List of sold & unsold players & teams in Indian Premier League 9 auction

LIVE UPDATES, IPL AUCTION 2016: Vikas Tokas enter the bid with a base price of Rs 10 lacs. Only Royal Challengers make a bid, and take him at the same price.

LIVE UPDATES, IPL AUCTION 2016: Kane Richardon goes under the hammer for a second time, with abase price of Rs 2 crore and Royal Challengers Bangalore take him. While his countryman James Pattinson goes unsold. Is Richardson a better option over Pattinson? Next goes under hammer, Samuel Badree and RCB takes him as well, they buy him for his base price of Rs 50 lacs!

LIVE UPDATES, IPL AUCTION 2016: Akshay Karnewar who hails from Vidarbha began with a base price of Rs 10 lacs and RCB buys him for the same price.

LIVE UPDATES, IPL AUCTION 2016: Praveen Dubey under the hammer with a base price of Rs 10 lacs. The bidding is opened by Delhi Daredevils and Royal Challengers Bangalore. DD back out and RCB take Dubey for Rs 35 lacs.

LIVE UPDATES, IPL AUCTION 2016: Iqbal Abdulla bases at Rs 10 lacs and Royal Challengers Bangalore opens the bid and get him as no other franchise were interested. Abdulla previously had played for RCB so he just returns home! RCB buys Abdulla for Rs. 10 lacs.

Just woke up to the news that @ShaneRWatson33 and #StuartBinny are coming to @RCBTweets…. Line up is Looking pretty bloody strong! @IPL

LIVE UPDATES, IPL AUCTION 2016: Stuart Binny in with a base price of Rs 2 crore. The firts bid comes from Royal Challnegers of worth Rs 200 lacs. And it seals the deal, Binny will play for the RCB from this season. Good deal for them? He is the only second player to be bought by tehse franchise so far in this auction.

Incredibly excited to join @RCBTweets. Can’t wait to meet up with my new teammates in April.#IPL2016

LIVE UPDATES, IPL AUCTION 2016: Shane Watson was the player number 8 to go under the hammer in today’s auction. He begins with a base price of Rs. 2 crore. This player has a maasive IPL experience playing having played for Rajasthan Royals right from season one. The first bid comes from Pune, follwoed by Royal Challengers Bangalore. At Rs. 550 lacs, Pune do not make a move. Mumbai Indians bring in their bid, Rs. 800 lacs. RCB now Rs. 950 lacs. Watson is in demand, RCB are bent upon taking him. Watson crosses Isnat Sharma’s price, Rs 9.5 crore and Waston will be ina new jersey from this edition!

RCB has in recent times been a team that has dazzled the crowds and fans alike with their outspoken and expressive characters within the squad. In Kohli they have one of the most expressive players going around the world, closely followed by West Indian charisma or Universe Boss as he calls himself, Chris Gayle. To add to the other teams horror, in AB de Villiers they have one of the most destructive batsmen ever in Twenty20 (T20) cricketing history [all formats basically]. RCB also have Australian paceman Mitchell Starc who has had infamous outing in the previous editions of IPL and was one of highly anticipated cricket around the world in recent past(nursing an injury), South Africa all-rounder David Wiese will provide for a good support to the flexibility for the team, with New Zealand’s Adam Milne capping off a already brilliant squad list. In  Sarfaraz Khan, Kedar Jadhav, Sreenath Arvind, Mandeep Singh and Varon Aaron they have the new generation of superstars in their line-up already. READ: Royal Challengers Bangalore (RCB) in IPL 2016: Know your team 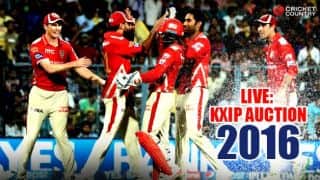