RCB are facing CSK in the IPL 2015 at Bangalore.

Royal Challengers Bangalore (RCB) face the Chennai Super Kings (CSK) will battle it out in the Indian Premier League (IPL) 2015 match at the M Chinnaswamy Stadium, Bangalore. RCB are trying to find a victory after a few defeats and it has not been an easy for them. CSK are coming off a defeat and will be hoping to get back to winning ways in this game. Live Updates: Royal Challengers Bangalore vs Chennai Super Kings, IPL 2015

RCB will be wanting their batsmen to come firing in this game. Chris Gayle had a tough outing against the Mumbai Indians (MI) and it was quite a surprising sight on the day. CSK have better bowlers and they would have picked a thing or two from that game. They too could try to perhaps get into the same strategy and try to tie down Gayle in knots and not let him get away. Live Cricket Score: Royal Challengers Bangalore vs Chennai Super Kings, IPL 2015

CSK are a good side and RCB have firepower. Form-wise, RCB are behind and they have the opportunity to bounce back in this game and get back to winning ways. This is their home game and a good opportunity to use it at a time when CSK are coming off a defeat in the last game. A good game lies ahead in prospect, and if both teams play to potential, it would be a cracker. 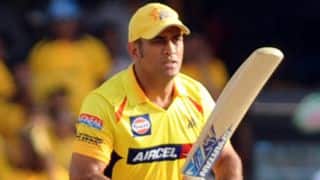