Gujarat Lions skipper Suresh Raina will miss the clash against RCB in Match 44 of the IPL Season 9.

Royal Challengers Bangalore will be going head-to-head with Gujarat Lions in the 44th match of the Indian Premier League (IPL) edition 9. The match will be played at the M. Chinnaswamy Stadium in Bengaluru. Two websites— hotstar.com and Star Sports Online can be used for live streaming the match. The channels which will be telecasting the live broadcast of the match are Sony ESPN, Sony ESPN HD, Sony SIX and Sony SIX HD. RCB are approaching a knock-out game and GL also need to register a win as we get into the nervy stages of the tournament. The match promises excitement, thrill and heartbreaks. LIVE CRICKET SCORECARD: Royal Challengers Bangalore  vs  Gujarat Lions , Live Score, 44th T20 Match, IPL 2016

GL captain Suresh Raina is set to miss his first match of the IPL as he is unavailable due to the birth of his first child. Brendon McCullum might captain the side against RCB. But Raina’s captaincy might be missed as he has lead the team well in the past few matches despite his poor form with the bat. Players like Dwayne Bravo, Aaron Finch and Dwayne Smith might have to deliver for GL as they face a tough test. But their bowling will have to be at their best more importantly.

Virat Kohli, RCB’s captain has been at his commanding best in this season of the IPL. He has scored two hundreds and is also leading the chart for the leading run-scorers. Their batting has been dominant although the bowling unit hasn’t been consistent and has lost them matches. RCB’s bowlers will need to step-up if the team wants to progress into the play-offs. 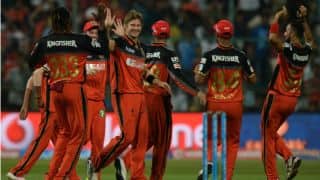