RCB have an uphill task of defeating the in-form Punjab team.

In the Indian Premier League (IPL) 2014 match No 31, Royal Challengers Bangalore (RCB) will meet Kings XI Punjab (KXIP) at Bangalore.  Punjab have been a roll in IPL 7, as they have won six out of their seven games till now. On the other hand, RCB have been a misfiring unit.

In their last game against Chennai Super Kings (CSK), Punjab beat CSK by a margin of 44 runs. It was Glenn Maxwell, who yet again was the star performer for them with an enterprising knock of 90. On the other end, Bangalore have won only two of their seven games so far. They lost their last game to Mumbai Indians (MI) at Wankhede stadium.

For Punjab, it has been a case of teamwork that has helped them to do very well. Maxwell has been a star performer for them by amassing 435 runs in seven games at 62.14. Others too like skipper George Bailey and David Miller have chipped in with useful runs. In the bowling department, the likes of Lakshmipathy Balaji, Sandeep Sharma, Akshar Patel and Rishi Dhawan have been among the wickets. It shows that they have not relied on one individual to win mages.

Bangalore though, have struggled for form and consistency in the tournament. AB de Villiers, one of their key players showed his class with a superb knock against Sunrisers Hyderabad (SRH) which helped them to beat the opposition ranks. However, other than that knock, Bangalore batsmen don’t have much to show for in IPL 7. Parthiv Patel, Chris Gayle and Yuvraj Singh have occasionally come good, but they need more from their main batsmen. The biggest disappointment has been Virat Kohli. Bangalore’s skipper has aggregated only 140 runs till now at an average of 23.33.

It has been Bangalore’s bowlers who have largely kept them in the game. Varun Aaron, Yuzvendra Chahal and Mitchell Starc have been among the wickets. But even the trio failed to stem the run flow in the game against Mumbai.

Bangalore though, will hope that playing at their home ground will help them to upset the applecart and defeat table-toppers, Punjab. The track  at Chinnaswamy stadium tends to suit Bangalore’s batsmen,  as the even bounce will help the stroke-makers in the line-up to play on the up and through the line. But it has to be remembered that Punjab too have some fine stroke-makers in their ranks to take advantage of it.

From Bangalore’s point of view, it is almost like a must win game for them. For Punjab, it is all about continuing their winning momentum by beating Bangalore on their home turf. 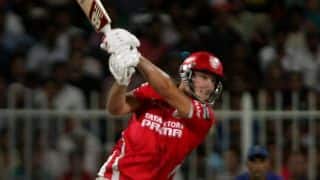 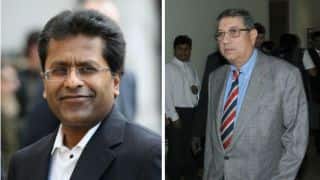