Both the teams play their 10th game of the season, as RCB look to go up the table.

RCB though have put in some good performances after the string of losses early on. Their bowling has been setting up games for them and with AB de Villiers back in the top three, things have started to work for them. When the top-order has failed, the likes of Mandeep Singh, Sarfaraz Khan have stepped up. Live Scorecard: Royal Challengers Bangalore vs Kings XI Punjab

KXIP are having a torrid time in the IPL 2015; having won just two out of the eight games they have played. Their batting has not clicked and apart from Sandeep Sharma and Anureet Singh their bowlers have not stepped up at all. In 2014, their strength was their batting which has gone down badly this time around. Indian Premier League 2015: Points table 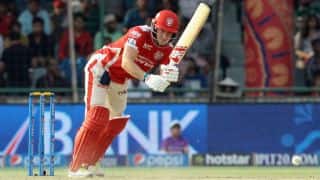