Even without Gayle, RCB's batting looks good thanks to Parthiv, de Villiers and Yuvraj.

A confident Royal Challengers Bangalore (RCB) unit take on Kolkata Knight Riders (KKR) in the 11th game of Indian Premier League (IPL) 2014 at Sharjah Cricket Ground on Thursday.  Bangalore have looked like a setup that can go all the way and lift the coveted IPL title for the first time in their history. On the other hand, Kolkata have had mixed results in their IPL 7 campaign. They started by convincingly defeating the Mumbai Indians (MI) by 41 runs. However, they couldn’t repeat that performance against Delhi Daredevils (DD) and lost by four wickets.

Bangalore have the required ammunition in their ranks to come out victorious in the game against Kolkata. Virat Kohli, AB de Villiers and Yuvraj Singh form a fine middle-order. Kohli has been in the form of his life and has a wide range of shots to counter both spin and pace. AB de Villiers has the ability to mix caution with aggression and can play innovative shots.  Bangalore will also be encouraged by the form that southpaw, Yuvraj showed against Delhi in their first game. He looked a different player to the one we saw in ICC World T20 2014. Despite Chris Gayle’s absence, opener Parthiv Patel has shouldered the responsibility of opening the batting well by giving Bangalore good starts. Gayle though, is expected to return for their crucial encounter against Kolkata.

In the bowling department, the likes of Mitchell Starc, Varun Aaron, Albie Morkel and company have been among the wickets. Bangalore have made the right choice by plumping for Starc. He brings that added variety into the attack with his left-armer’s angle. The huge bonus for them has been the form of leg-break/googly bowler, Yuzvendra Chahal. Batsmen in IPL 7 have struggled to pick his googly, which has been his surprise weapon.

Their opponents, Kolkata, will look to bounce back after a disappointing loss against Delhi. Jacques Kallis, the evergreen all-rounder, showed his class with a superb knock in the first game of IPL 7 against Mumbai. The young Manish Pandey, known for playing shots square of the wicket on either side, played well against Mumbai.  Robin Uthappa too looked in good touch against Delhi.

Amongst the bowlers, they have Sunil Narine. He has continued to outfox the batsmen with his box of tricks. He can turn the ball both ways without any discernible change in his action. Narine also bowls it quicker through the air, and as a result, batsmen struggle to use their feet against him.  Narine was at his best against Mumbai with four wickets next to his name.

Morne Morkel, the tall seamer has fired in fits and starts. Vinay Kumar has been below par. The all-rounder, Shakib Al Hasan, hasn’t looked like a real threat with his slow left arm. At best, he was a steady performer in the first two games.

With the ground’s small dimensions, one should get to see another big score at Sharjah. Bangalore have the edge on paper, but in Twenty20s (T20), it is all about playing well on the day. 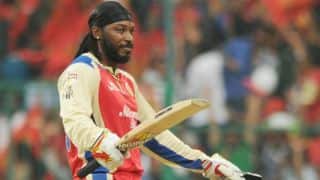 Meg Lanning, Arran Brindle and other women cricketers who have led at a younger age than ther male counterparts