Catch the live streaming of the IPL 2015 Eliminator between Royal Challengers Bangalore and Rajasthan Royals here.

Royal Challengers Bangalore (RCB) take on the Rajasthan Royals (RR) in the Eliminator of the eight edition of Indian Premier League (IPL) 2015 at Pune.  The winner of the game will get to play Chennai Super Kings at Ranchi, in Qualifier 2.

Catch all the action live and exclusive on Sony Six and Sony Six HD, and also Set Max in hindi commentary. Also catch the live streaming of the RCB vs RR match on the go by just logging on to starsports.com. Live scorecard: Royal Challengers Bangalore vs Rajasthan Royals, IPL 2015 Eliminator at Pune

The feature of live streaming has taken the world by storm, with cricket being broadcast live on the internet to the benefit of the hordes of fans who do not have access to a television set at home, or are constantly on the move. Live Streaming can be accessed even on hand-held devices where one can follow live updates, and even ball-by-ball commentary of the latest score from any part of the world via live streaming. IPL 2015: Complete Coverage 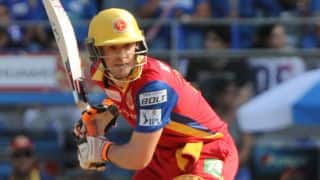