Royal Challengers Bangalore (RCB) are languishing at the bottom of the points table whereas Sunrisers Hyderabad are in the top 4.

7 0 1 8 9 8 2 0 2 5 0. No, I am not flaunting my phone number, but this is how Royal Challengers Bangalore‘s (RCB) scorecard read in their last tie versus Kolkata Knight Riders (KKR). A batting line-up comprising of one of the greats of T20s, best limited-overs player and most dangerous batsman in the world faltered in a chase of 132 at Eden Gardens. RCB created history as they succumbed to the lowest score in Indian Premier League (IPL) history (previous score of 58 was also held by them). Not even a single batsman managed to enter double digits. Ironically, it all happened on the same day when RCB wreaked havoc of now-discarded Pune Warriors in 2013 edition and piled up 263 for 5. Hence proved, cricket is a great leveller. After a horrendous night, RCB will like to muster courage and put up a show when they host Sunrisers Hyderabad (SRH) in match 29 of the tenth edition. Full Cricket Scorecard, Royal Challengers Bangalore vs Sunrisers Hyderabad, IPL 2017, Match 29

A look into the previous two meetings between both sides, points table and form clearly rules the hosts out of contest even before the first ball is bowled. Nonetheless, SRH’s all-rounder Ben Cutting does not feel so. “It happens time to time. RCB is still a very strong team”, quoted the Australian ahead of the clash. So is there more twist to the tale? Or RCB will continue to touch new lows and remain stagnant at the last position?

“Probably our worst batting performance, the worst of the IPL as well. Very hurtful for me to stand here and talk. I thought we could capitalise and cash in during the chase. I can’t say anything now, but our performance was unacceptable. Disgraceful batting, reckless from us, one of the worst collapses ever. We are a better batting unit than this, we scored 200+ in the last game, but this was shocking for everyone”, stated a dejected Virat Kohli after the horrendous surrender against KKR. It is a humongous task for any skipper to digest such a tame performance and lift his troops before the next match. However, returning back to home, RCB will like to start from scratch against a well oiled, yet slightly inconsistent, SRH.

Undoubtedly, Kohli will have to fire on all cylinders to stage his side’s comeback. He has two fifties to his name in the ongoing edition, but the team desperately needs a big innings from him. Having said that, Chris Gayle and AB de Villiers also need to buckle up if they are to stay alive in the tournament. The trio make a deadly top order, but it’s time the ‘big names’ actually deliver together.

Travis Head can make a comeback to the playing XI to bolster the batting line-up. He has been in good touch in the limited appearances for RCB. Head and Jadhav can make a steady left-hand right-hand combination at No. 4 for 5. Mandeep Singh has been a disappointment. He may still continue to get a game and bat at No. 6. Stuart Binny, another under-performing star, can come in at No. 7. The duo will get enough license to go bonkers at this position and it might be a blessing in disguise for them.

Pawan Negi will be handy at No. 8 who can slog big if required. Negi will be followed by RCB’s bowlers who were disciplined to restrict KKR from 65 for 1 to 131 all-out. RCB should retain the same bowling line-up with only Samuel Badree sitting out. No doubt, Badree can put a lid on the scoring but RCB are surprisingly struggling with the bat and it makes sense to play an extra batsmen by including Head.

Yuzvendra Chahal, Tymal Mills and Sreenath Aravind will have their task cut out to stop the SRH line-up, containing some renounced players, on a small ground. Kohli will keep an eye on Binny and Negi in the nets so that he can resort to them for containing runs.

Problems are a little less for the visitors. SRH won their first two encounters before falling in the next two. They won a cliff hanger against Kings XI Punjab (KXIP) and Delhi Daredevils before finishing second against Rising Pune Supergiant (RPS). With 4 wins in 7 games, SRH will like to accelerate against a side low on confidence. David Warner and Shikhar Dhawan will open the innings with Kane Williamson batting at No. 3.

Moises Henriques will bat at No. 4 after a blistering 28-ball 55 in the last game. Yuvraj Singh wasn’t well for the tie against RPS. If fit, he will walk into the side at No. 5. His blitz in IPL 10’s opening game against RCB won him the Man of the Match. Deepak Hooda and Naman Ojha will strengthen the batting order with their late onslaught at No. 6 and 7.

Rashid Khan has been economical and been rewarded with 10 wickets in 7 games. He will continue to outfox the batsmen with his leg breaks and googlies. Gayle will be wary of Rashid’s capabilities as West Indians are known to falter against leg spinners. Bhuvneshwar Kumar, with 16 wickets and the Purple Cap holder, will spearhead the pace battery with youngster Siddarth Kaul and veteran pacer Ashish Nehra. Nehra should make a return into the side with young guns like Kaul and Mohammad Siraj spraying the balls in all corners. His availability and experience will be beneficial for the visitors.

Talking about numbers, RCB have the edge hosting SRH. From 5 games, RCB have emerged victorious on 3 occasions but the script changes in overall head-to-head record. SRH have won 6 out of 10 matches and had the last laugh in the last two encounters. SRH have the firepower and form to go the distance and inflict more pain on a hapless RCB at the moment. But then, this is IPL. A paradise of the unprecedented. 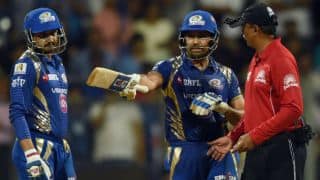