MS Dhoni-led have no choice but win the rest of their matches in this ninth edition of IPL.

Royal Challengers Bangalore (RCB) face Rising Pune Supergiants (RPS) in Match 35 of Indian Premier League (IPL) 2016 at Bengaluru on Saturday. While RPS have won three from nine matches so far, RCB have played two less and have managed to register only two win in the tournament. RCB are coming off yet another defeat in their previous game when they had played Kolkata Knight Riders (KKR). Having played only seven matches in the group stage, RCB can afford to lose another game and still make it to the knockout stage of IPL 2016. LIVE CRICKET SCORECARD, Royal Challengers Bangalore vs Rising Pune Supergiants, IPL 2016, Match 35 at Bangalore

On the other hand, MS Dhoni-led have no choice but win the rest of their matches in this ninth edition of IPL. In the previous eight seasons, Dhoni’s Chennai Super Kings had qualified for the semi-final every time and if RPS miss out in IPL 2016, it will be for the very first time that Dhoni won’t be around in the crucial knockout stage of IPL.

Despite scoring a competitive total of 185 against KKR, RCB failed to defend it, yet again. The poor show from their bowling attack has miserably let them down. The likes of Staurt Binny, Shane Watson, Varun Aaron, Sreenath Aravind and Yuzvendra Chahal have not managed win RCB their matches even when the target for the opponents have been 190+ most of the times. 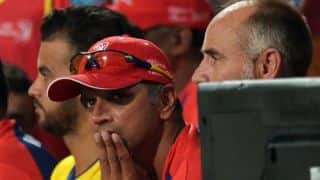