Indian Premier League's leading wicket taker, Rudra Pratap Singh, may have been out of favour in India's scheme of things but the left-arm pacer is hoping that season five of the T20 tournament will bring him back in the national reckoning. 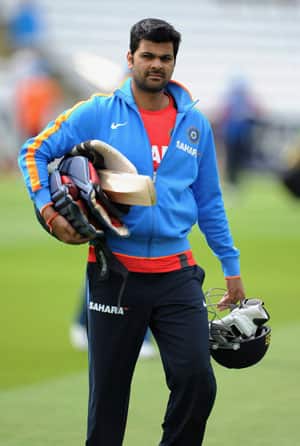 Indian Premier League’s leading wicket taker, Rudra Pratap Singh, may have been out of favour in India’s scheme of things but the left-arm pacer is hoping that season five of the T20 tournament will bring him back in the national reckoning.

The Mumbai Indians bowler, who has 56 wickets from four seasons in IPL, is eyeing a Team India comeback in September’s ICC World T20 in Sri Lanka.

“IPL is huge. All the matches are important and I’m happy to have made an impact in the previous four editions. It gives one a big platform to perform against the world’s best. I’ve been able to bounce back twice through IPL. This time also, I’m looking forward to it,” he told PTI from Mumbai.

Talking on the sidelines of Mumbai Indians’ practise at the Wankhede, the 26-year-old is not only working hard on his bowling but he is doing overtime at the nets, honing his batting skills to come in handy in the death overs.

“I am working out hard, following a strict schedule. I am raring to go. There are no fitness concerns. In T20, a bit of batting can also come in handy. I am working on my batting to contribute to the team’s cause,” RP said, referring to his teammates Harbhajan Singh and Lasith Malinga’s exploits with the bat.

The left-arm pacer had successful stints with Deccan Chargers and Kochi Tuskers Kerala, with him winning the purple cap in season-II when he was with the Hyderabdi side.

The Mumbai side bought RP for USD 600,000 for IPL-V and the bowler said he feels really lucky to play with Sachin Tendulkar.

“What can I say about somebody who is the world’s best batsman. I can just say that I’m lucky to play under him. I’m yet to speak to him after joining here. I’m looking forward to him.”

He further said they have the top five IPL bowlers, besides boasting of a star-studded batting line-up.

“We are not stars, just players. It’s a great dressing room. I know each of them. We have a balanced unit. I’m looking forward to contribute to the team’s cause.”

The Uttar Pradesh pacer had to go through a frustrating time in the last few months when he was rushed to England after Zaheer Khan’s injury but only to be ignored for the Central Zone’s team for Duleep and Deodhar Trophy.

He said he did not want to talk about selection matters.

“There will be ups and downs. But you will have to keep trying. Selection is not in my hands. I am just giving my best,” he said. (PTI)