Indian cricketer RP Singh wants to get back to his studies and earn his graduation degree.

His graduation course from the Lucknow university was abruptly cut short in 2008-09 owing to his commitments for the Indian cricket team.

Singh met office bearers of the Lucknow University Teachers Union (LUTA) late on Friday and expressed his desire to complete his graduation.

University officials told IANS that the Indian pacer met LUTA general secretary Neeraj Jain and informed him that he had missed his political science papers of IIIrd year due to engagements at international matches and now intends to reappear for the exams.

Jain assured the cricketer that he would take up the matter and push his case with varsity vice-chancellor S.B. Nimse and examination controller A.K. Sharma.

“As a speacial case, we would definitely like to consider the case of Rudra Pratap Singh and explore options to help him under the existing varsity rules,” said a faculty member. 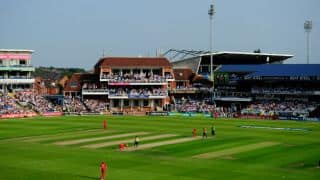