Manish Pandey looked to have taken from he had left against Chennai Super Kings (CSK) in the previous game as he scored his second successive fifty but Rajasthan Royals (RR) managed to fight back as Shreyas Gopal and Oshane Thomas dismissed Pandey and David Warner respectively as Sunrisers Hyderabad (SRH) were 121/3 at the time of the second strategic time-out in the 45th match of the Indian Premier League (IPL) 2019 at the Sawai Mansingh Stadium in Jaipur on Saturday.

The Indian right-hander, who joined David Warner in the fourth over after Shreyas Gopal dismissed SRH skipper Kane Williamson, took on the RR bowlers as he brought up his second successive fifty in the 12th edition of the tournament.

Pandey got going from the first ball as he hit his state teammate at Karnataka for a four. SRH, who were 51/1 in the powerplay, scored 70 runs in the next nine overs, with Pandey dominating the proceedings.

Steve Smith, meanwhile, was pivotal as he took a stunner to deny his countryman his sixth successive fifty-plus score in this season. After Warner tried to go over extra-cover but mistimed it in the direction of mid-off, Smith, running backwards, kept his eyes on the ball and took a diving catch to give RR their second breakthrough.

Just when it looked that SRH were dominating the show despite Warner’s fall, Shreyas Gopal, who had given RR their first breakthrough, dismissing Kane Williamson, got Pandey out for 61. The right-hander was out stumped as RR managed to peg SRH back right at the stroke of the second strategic time-out. 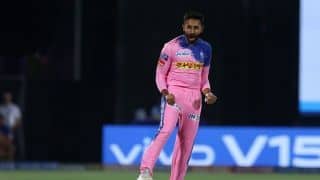