Domingo admitted that he is worried about AB de Villiers, but remains adamant that the skipper would be the first one to be considered for the upcoming two-match Test series against New Zealand.

Johannesburg: South African coach Russell Domingo has blamed excessive workload over his players as the reason behind his side’s failure to reach the finals of the Caribbean tri-series. The Proteas’ hopes of making it to the tournament finals were crushed after they suffered a 100-run defeat against hosts West Indies in the crucial ninth match of the ODI tri-nation series at Kensington Oval on June 24. The loss also invited a flurry of criticism from the media with experienced player Morne Morkel and skipper AB de Villiers being blamed for the defeat. De Villiers: Domingo not to be blamed for Tri-series debacle

Domingo, however, blamed excessive workload for the team’s failure and insisted it is extremely difficult to maintain consistency and standard with hectic schedule, Sport24 reported. When it comes to workload, swashbuckling batsman De Villiers is a hot topic as he has not taken break since the start of the season. Domingo admitted that he is worried about the 32-year-old, but remains adamant that the skipper would be the first one to be considered for the upcoming two-match Test series against New Zealand if he proves his fitness. South Africa will play two-match Test series against New Zealand, starting from August 19 at Kingsmead. Russell Domingo: South Africa do not fear Mitchell Starc

South African skipper AB de Villiers has backed embattled coach Russell Domingo, saying he has put the side through their paces ‘like never before’. Domingo has come under huge pressure following South Africa’s exit from the ongoing Caribbean tri-nation series. The De Villiers-led side were bundled out for 185 against hosts West Indies to lose the crucial ninth match by 100 runs and surrender their hopes of making it to the tournament final. Following the defeat, the swashbuckling batsman insisted that Domingo had played a major role in transforming the career of many Proteas players in the last four years. 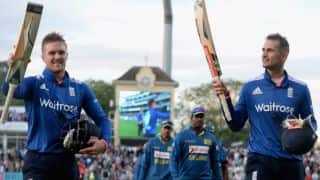