Australian fast bowler Ryan Harris criticised the practice of ball-tampering by putting it on the same pedestal as match-fixing. The pacer made his remarks in the wake of Vernon Philander being fined by the International Cricket Council (ICC) for scratching the surface of the ball on the third day of the first Test against Sri Lanka at Galle.

Harris, currently ranked second in the world among Test bowlers, said there was ‘no room in the game’ for those who tamper with the ball. “It’s the same as match-fixing for me; it’s the same sort of thing. It’s disappointing. There’s no room for it, no need for it,” Harris was quoted as saying to Cricket Australia.

The South African seamer, who is one place behind Harris on the rankings, was charged with the offence after footage showing him scratching the ball with his finger and thumb was shown to the umpires and the match referee. Philander accepted the charge without contest, which avoided the need of a hearing, and was fined 75 per cent of his match fee as a result.

Harris, who played a vital part in a 2-1 Test series win over the Proteas earlier this year, expressed surprise upon hearing the news of Philander committing such an act, whom he regards as a ‘good bowler’.

“I don’t the guys [in the South Africa team] individually too well but I wouldn’t have thought teams would go out and do that deliberately. Obviously they do,” said Harris. “Steyn, Morkel, even Philander; they’re good bowlers,” added Harris.

Aussie opener David Warner had enraged hosts South Africa in the three-Test series in March by suggesting the on-field umpires keep an eye on the Proteas at all times. Harris however denied any impact on their win as Australia reclaimed the World No 1 Test ranking. 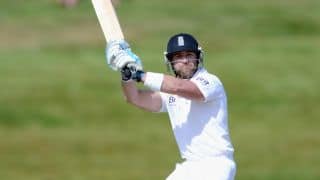