Australian pace bowler Ryan Harris is likely to miss the forthcoming West Indies tour in June in order to attend the birth of his first child.

The veteran bowler said that he was not sure about the West Indies tour as he had got a baby due early June which was when the tour was on, adding that coach Darren Lehmann had advised him to stay at home, News.com.au reported

Harris further said that since West Indies is the furthest place to get home from, Darren wanted to make sure he was there and spending time with his wife.

Meanwhile, Harris is likely to play several Sheffield Shield matches for Queensland after being omitted from Australia’s 15-man World Cup squad which he had hoped to make. 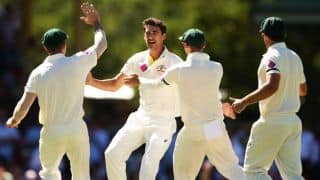