There are a team of experts working with him headed by Saqlain.

Suspended spinner Saeed Ajmal is doing everything to correct his action but it is an “uphill task” for him to make it to the Pakistan team for the ICC World Cup 2015, says PCB chairman Shaharyar Khan.

“I have just spoken to Ajmal before I came here. He is trying very hard. There are a team of experts working with him headed by Saqlain but the point is he himself admitted that ”Sir mujhe maloom hain ki galti kahaan huyi hain aur main usse theek karne ki koshish bhi kar raha hoon (Sir I know where I have made a mistake and trying hard to rectify that),” PCB chief Khan told PTI during an interaction with select gathering at Pakistan High Commission here

“I have been told that he has been able to bring his flexion angle (elbow use) down considerably but it is still above permissible limit,” Khan added.”Ajmal is confident but it indeed is an uphill task. It’s not only doosra or faster ball that is in question but his entire action and it is being changed. When you ask me what are his chances of playing I would say it is 50-50 as of now,” said the career diplomat, who is on a visit to Asian countries to seek resumption of cricketing ties in Pakistan.

Khan was hopeful that he would be able to convince cricket boards to send their A and junior teams to Pakistan. “I would be meeting ICC chief Mr N Srinivasan in Dubai 3-4 days time. People over here know my track record in promoting relationships through cricket. Look India playing Pakistan in India is not a problem. But problem is India’s senior team travelling to Pakistan, which is not possible due to security concerns,” he said. 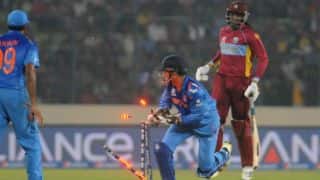