Sachin Tendulkar has scored the most runs in Tests and ODIs.

Born on April 24, 1973, Sachin Tendulkar is considered one of the best players to have ever played cricket. He has 100 international centuries to his name and close to 35,000 international runs to his credit as well. He was no mug with the ball as well. As his leg-breaks and googlies aften troubled the batsmen all around the world. He has been used in the death many times as well.  Happy Birthday, Sachin Tendulkar!

The world took notice of Sachin Tendulkar  when he shared a mammoth 664-run partnership with Vinod Kambli while playing for Shardashram Vidyamandir against St Xaviers school. It was Ramakant Achrekar who shaped the early cricketing career of Tendulkar coaching him since his school days. Sachin Tendulkar – Not just talent, but immaculate work ethic

He became the youngest Ranji cricketer when he represented Bombay against Gujarat on December 11, 1988 at the age of 15.  Aged 16. Tendulkar became the youngest to play for India when he toured Pakistan in 1989. The, he scored his first century at Old Trafford against England under trying circumstances.  The Indian tricolour looked apt on Sachin Tendulkar’s navy blue helmet

Tendulkar then became the first Indian player to represent Yorkshire in 1992, when he replaced Craig McDermott and he scored 1070 runs in 16 First-Class matches. One of the best innings of tendulkar’s career came when he scored 114 against Australia at a bouncy pitch at Perth. These two innings and a ton against England earlier had many people wondering if Tendulkar was a player with special talent. Sachin Tendulkar makes T20I debut, as do India

Tendulkar was appointed captain in 1997 and tasted success when he led his team to a 4-1 win over arch-rivals Pakistan in the Sahara Cup. Tendulkar then smashed back-to-back centuries against Australia to almost single-handedly win India the Coco-Cola cup in 1998. He scored 143 to take India to the final and then followed it up with 137 in the final. Sachin Tendulkar’s savage attack that became the defining moment in India’s ODI

Tendulkar held the mantle of captaincy twice between 1996 and 2000. The team didn’t fare well and he stepped down. Later when Rahul Dravid stepped down from captaincy in2007, Tendulkar refused to take over the post and instead suggested MS Dhoni’s name. And by now we know what great recommendations are like as Dhoni turned out to be one of the most successful Indian captains. Tendulkar’s opening partnerships with Ganguly and Sehwag among the best in ODI

Sachin Tendulkar receives the Rajiv Gandhi Khel Ratna Award from erstwhile President K.R. Narayanan at the Presidential Palace in New Delhi in 1998. He then was awarded the Padma Shri in the following year. In 1999, in what was probably Tendulkar’s bravest innings, he scored a match-winning 141 against Kenya in the World Cup, just days after his father passed away. The same year he also scored his maiden Test double century against New Zealand at Ahmedabad. Sachin Tendulkar: A timeless fairytale

In 2001, Tendulkat completed 10,000 runs in his 261st One-Day International (ODI). The following year he crossed another major milestone when he overtook Don Bradman’s tally of 29 Test centuries. Tendulkar then was awarded the man of the series in the 2003 World Cup for amassing a total of 673 runs in 11 matches, which happens to be the most number of runs scored in a single edition of the World Cup. India reached the final, but lost out to a rampant Australian side. Ironically, India exited the World Cup in 2007, which is surely Tendulkar’s lowest point in the Indian jersey. Sachin Tendulkar’s and his generation’s sense of dread

Tendulkar then went past Sanath Jayasuriya’s of most appearance in ODI’s when he made his 445th appearance against Bangladesh in the opening match of the ICC Cricket World Cup 2011. In his sixth World Cup appearance, Tendulkar managed to win his first World Cup for India. The following year, Tendulkar would go on to score his 100th international ton in a match against Bangladesh. Sachin Tendulkar — awesome insights into his greatness as a cricketer & human being by an insider

Tendulkar would then go on to win the Indian Premier League (IPL) with Mumbai Indians (MI) and to round it off, he also won the Champions League T20 (CLT20) the same year. Tendulkar then decided to retire from Tests in 2013 and there was a two-Test series played for his farewell. He also made his 200th Test appearance in that match. Sachin Tendulkar and his magical aura 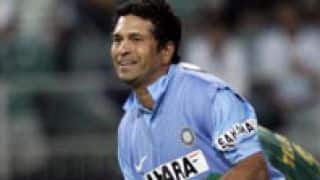