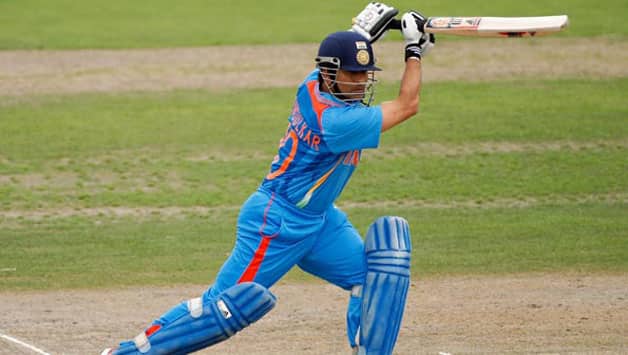 In his 23-year-long ODI career, Sachin Tendulkar has innumerable records to his name © Getty Images

Tendulkar spent 23 years at the crease in the one-day game before retiring from 50 over cricket on Sunday with a record unlikely to be matched.

The 39-year-old amassed a record 18,426 runs in 463 one-dayers with 49 centuries. South African Jacques Kallis is his nearest active contemporary with 11,498 runs and 17 hundreds.

“I think he is an amazing player,” Ponting once said.

“You look at his records, and they are quite incredible. And to think that someone can stay in the game for 20 years is pretty remarkable as well.”

Feared and respected by opponents, Tendulkar changed the definition of Indian batting, shrewdly combining orthodox and unorthodox shots to dominate any attack on any surface at home or abroad.

He brought not only flair and flamboyance, but also aggression to Indian batting, doing away with the days of the defensive approach with his attractive stroke-making against both pace and spin.

Legendary India opener Sunil Gavaskar, the first batsman to complete 10,000 Test runs, said he was convinced Tendulkar would achieve greatness when he first saw him bat in the nets more than two decades ago.

“It is hard to imagine any player in the history of the game who combines classical technique with raw aggression like the little champion does. There is not a single shot he cannot play,” he said.
Tendulkar shattered batting records, earned millions of dollars and was revered as a demi-god by his fans, but humility remained his prime virtue.

If there was any arrogance, it was only in his batting because he loved to dominate bowling with exciting and aggressive strokeplay, always putting the team’s interests first in a glorious career.

As he helped India rise steadily in both Test and one-day cricket, his refrain was often that “I never play for records” or that “individual delight fades before a team’s celebration.”

“The way he conducts himself and handles fame and everything that goes with being Sachin is a great example for all sportsmen,” Australian leg-spin great Shane Warne wrote in his book “Shane Warne’s century”.

“On the field, he has never put himself before the team.”

Tendulkar earned the sobriquet of “Master Blaster” for the audacious batting in the first decade of his career before becoming more selective in his shot-making following injuries to his elbow, back and ankle.
Such was his stature that his failures were as hotly debated as his successes and when he missed a match due to an injury his medical bulletins became a national obsession.

Australia’s Sir Don Bradman, widely considered the greatest Test batsman of all time, once said Tendulkar’s style of batting reminded him of his own, which was based on dominating and demoralising the opposition.

That Tendulkar will still be available for India in Test cricket will come as a relief for team-mates and fans alike despite his lean streak in recent months.