India vs Australia: Ajinkya Rahane had a talk with Sachin Tendulkar recently in Mumbai during a training session.

Sachin Tendulkar‘s tips are always considered priceless for any batsmen. India’s Ajinkya Rahane has received some ‘words of wisdom’ from the legend. Rahane had a talk with Tendulkar recently in Mumbai during a training session. The discussion was regarding how Rahane could improve his game as he struggles to cement his spot in the Indian ODI side. The right-hander also posted a picture on Instagram with Tendulkar following his pep talk during the training session at Mumbai’s Bandra-Kurla complex. FULL CRICKET SCORECARD: India vs Australia 2017, 3rd ODI at Indore

“”For four days, I did nets at the Bandra Kurla Complex [BKC in Mumbai]. When I met him [Tendulkar], he said, “back your game. You will get opportunities sometimes and sometimes you won’t. What’s in your hands is your preparation. You should have right mindset. He did not say anything about my technique but spoke only on the mental aspect. He has played a lot against Australia and he mentioned what line and length they bowl. How to prepare for that. I have got confidence after talking to him,” said Rahane, as reported by PTI.

Rahane is currently a part of the five ODI series Australia at home. 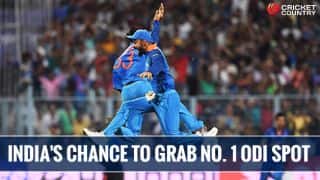