Tendulkar posted a photo of him smiling with former teammates Yuvraj Singh and Zaheer Khan.

Sachin Tendulkar was delighted with his ISL  team Kerala Blasters’ 3-0 win over Chennaiyin FC in the first leg of the semi-finals. Tendulkar posted a photo of him smiling with former teammates Yuvraj Singh and Zaheer Khan. He also thanked the crowd for their fantastic support.

Kerala Blasters pumped in two goals in the space of two minutes in the first half. Cheered by over 60,000 crowd at the Jawaharlal Stadium, Kerala, who barely scrapped through to the semifinals as the fourth-placed team in the league phase, turned the form book into its head to outplay the Chennai side. Ishfaq Ahmed (27th minute), captain Iain Hume (29th) and Sushanth Mathew (90+4) got the goals for Kerala.

Kerala, the least attacking side among the eight teams in the tournament with just nine goals from 14 league games, found the target when it mattered the most. They relied on their defensive solidity in the initial few minutes before their forwards delivered the goals. 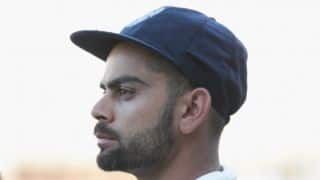