Achrekar rose to prominence in the 1980s when most of his students made names in Mumbai's local cricket.

One of the many famous stories from Sachin Tendulkar s childhood includes the tale of one-rupee coin that would be kept on a stump by his coach Ramakant Achrekar during the training sessions.

If Tendulkar would not get out for a specific time period, he would earn that coin. However, it would go to anyone who would dismiss the child prodigy who went on to become one of the best batsmen in the history of cricket. Ahead of the release of his biographical documentary, Tendulkar revealed that he used to treat the coin no less than an Olympics medal.

It was a medal for me. When someone competes in the Olympics and wants to win a medal and we used to compete like that. When sir used to put the Rs 1 coin on the stump all the bowlers used to bowl with a lot of enthusiasm to bowl me out. It did not matter who was taking the catch. If there was a street vendor around and he takes the catch, then you are out. All this forced me to keep the ball on the ground, Tendulkar told News Nation in an interview in 2017.

Also close to my heart are Muhammed Ali gloves signed by him and Sir Don Bradman autographed bat and frame, he added. 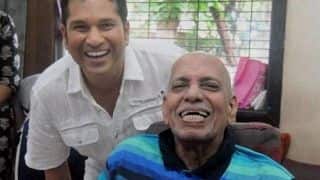