Murali Vijay hit his third Test hundred even as he lost his opening partner, Shikhar Dhawan (187), early on Day Four of the third Test, to take India to 384 for three at lunch. India now trail Australia by just 24 runs. 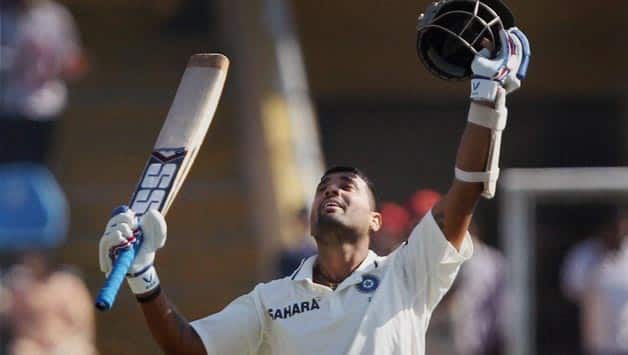 Murali Vijay hit his third Test hundred even as he lost his opening partner, Shikhar Dhawan (187), early on Day Four of the third Test, to take India to 384 for three at lunch. India now trail Australia by just 24 runs.

Sachin Tendulkar (37) fell at the stroke of lunch, to part-timer Steven Smith no less, to help Australia to a bigger share of the spoils of the session, which saw 101 runs being scored at the loss of three wickets. However, considering the overall picture — with five sessions left, seven wickets in hand and just a 24-run deficit — not many would argue against the fact that India is in the driver’s seat.

After a record fastest debut century on Day Three, Dhawan fell 13 runs short of a landmark double hundred in his first ever match. Ed Cowan, at silly point, gobbled up an edge off the bowling of Nathan Lyon to dismiss the new Delhi dasher, who fell after adding just two runs to his overnight score of 185.

Four overs later, Australia’s morning got even better, with a little help from umpire Aleem Dar, as a diligent Peter Siddle earned a leg-before decision that, replays later showed, had taken the inside edge of Cheteshwar Pujara’s (1) bat. The Saurashtra batsman, who had scored a match-winning double ton in the second Test at Hyderabad, looked understandably disappointed as he walked back. Australia would say they deserved a bit of luck after an unproductive Day Three with the ball.

This brought the 197-Test veteran Tendulkar out to the middle, among raucous applause, to join someone who has played 183 matches lesser than him. Anyone in place of Vijay, whose gritty knock of 83 not out on Saturday was completely overshadowed by Dhawan’s pyrotechnics, would have felt, “What do I need to do to get noticed here?” But not Vijay.

The 28-year-old Chennai boy was happily innocuous in his composed innings on Saturday, taking the backseat to Dhawan and industriously going about his knock. On Sunday, with a bigger crowd in attendance, Vijay felt no urge to show his own brand of attacking batsmanship, and readily built a watchful partnership with the Little Master.

Known to be an immaculate timer of the ball, Vijay reached his third Test ton, all of which have come against the Australians, by prancing down the track and lofting Nathan Lyon to the wide long-on fence. It was one of the few rash strokes he played in his technically pleasing innings. By the time he took lunch on Day Four, 98 of his 142 runs had come on the leg-side. The most enjoyable of his strokes has been that prance down the strip and heave over long-on, which has fetched him three sixes and two fours.

India would be looking for a lead of about 200 if they are planning to go for a win here, which would mean that VIjay’s job isn’t done yet. Australia have bowled really well today with Siddle and Lyon probing and asking constant questions to the Indian batsmen on a pitch that refuses to offer any help.

Michael Clarke’s men would look to carry forward the momentum gained with Tendulkar’s fall and would do well to restrict India’s lead under 100. But with names like Virat Kohli and MS Dhoni still to grace the middle, India would have to bat really bad to get bowled out under 500.