Sachin Tendulkar, India batting legend, took to micro-blogging site Twitter to express his appreciation to fans who gave the inaugural season of India’s newly launched domestic football tournament, the ISL an overwhelming response. Tendulkar is co-owner of the Kerala Blasters team which made it to the finals but failed to clinch the title losing to Athletico de Kolkata in the end.

Tendulkar in his tweet not only thanked fans and congratulated his own team, but even congratulated the victorious opposition. The tweet read  “Great inaugural ISL season. Well played @KBFCOfficial team, proud of your display. Congrats @atletidekolkata.” 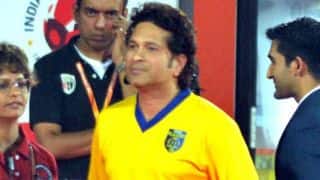