Earlier,before CA announced their verdict, many cricketing legends criticised one Test ban to be very mild.

Steven Smith‘s crying videos and images made the day for the media. Social media, too, was full of it. Smith and David Warner have been banned from International cricket and domestic cricket for a year and not allowed to captain the side for two years. Cameron Bancroft, on the other hand faced a ban for nine months.

Before Cricket Australia announced the ban, Smith was handed a suspension for 1 Test along with 100 per cent match fees by ICC. The yearlong ban received mixed emotions from all corners.

Many Indian players have shown sympathy towards the Australian players while some have requested the media to go easy on them. Here are some tweets.

They are regretting and hurting and will have to live with the consequences of their act. Spare a thought for their families as they have much to endure along with the players. Time for all of us to take a step back and give them some space.

Cricket has been known as a gentleman’s game. It’s a game that I believe should be played in the purest form. Whatever has happened is unfortunate but the right decision has been taken to uphold the integrity of the game. Winning is important but the way you win is more important Sachin Tendulkar (@sachin_rt) March 28, 2018

A year ban for ball tempering ?? That s a joke.What kind of crime they have done ?Taking the game away from someone for a year is absolutely nonsense.understand if ban was for 1 test series or 2 but this is ridiculous.hope @CricketAus reduce th ban @stevesmith49 @davidwarner31 Harbhajan Turbanator (@harbhajan_singh) March 29, 2018

Feel the pain he is going through. Waiting for him to come back soon and cause delight to fans across the world with his supreme batsmanship. Remember Warne served a 1 year ban for a banned substance and came back with 26 wkts in 3 tests against SL. https://t.co/u6gE93aPvM

The world simply wants to see you cry, once you have cried they will feel satisfied and live happily ever after. If only Empathy was not just a Word and people still had it. God give @stevesmith49 and Bancroft all the strength to come out of this.

Soon after CA announced their verdict, the duo were banned from playing in the IPL 2018. Ajinkya Rahane will lead Rajasthan Royals whereas, Kane Williamson will captain Sunrisers Hyderabad. 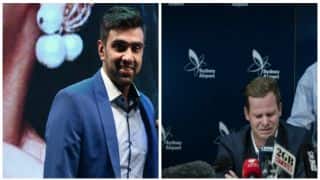