Senior batsman Sachin Tendulkar today was hit on the right hand while batting at the nets during Mumbai Indians training session ahead of their IPL match against Royal Challengers Bangalore. 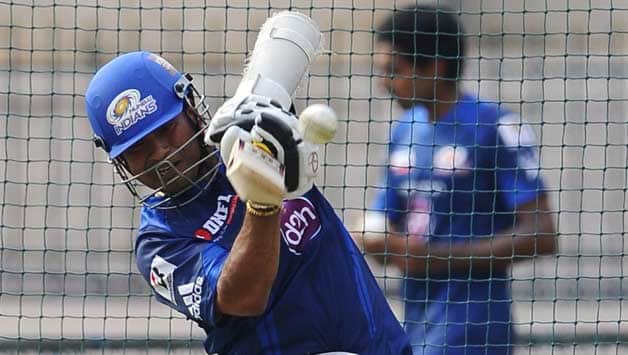 Senior batsman Sachin Tendulkar today was hit on the right hand while batting at the nets during Mumbai Indians training session ahead of their IPL match against Royal Challengers Bangalore.

Tendulkar tried to cut a delivery from Jacob Oram, when the extra bounce caught him unawares hitting him on the right hand.

“I should be fine for tomorrow,” the veteran said. His teammate Dwayne Smith also said the 40-year-old should be fit to play in tomorrow’s match.

“He should be okay. Just a case of him getting checked up, but nothing is wrong, I think,” Smith said in the pre-match media conference at the Wankhede Stadium.

Smith, who cracked 62 off 45 balls against Kolkata Knight Riders in the previous game on Tuesday at Kolkata, welcomed the chance to open the innings with Tendulkar.

“I don’t think there is any pressure because I came here to open the batting, so I get my opportunity to open; so it is just for me to go out there and perform for Mumbai Indians.

There is no pressure. It is the best position to bat in a T20 game actually,” the West Indian said.

“Only four overseas players can play. We went with the best team possible at the start of the competition. I have got my opportunity now but since I have got a start, I wish continue and be consistent,” he added.

Meanwhile, RCB’s left-arm medium pacer RP Singh said the table toppers would be in a fine position to make the play-offs if they win just over half of their remaining games.

“We are confident but at the same time we are fully focused towards game. Out of eight matches, we have won six matches, so we are in better position, but still long way to go,” RP said.

“We have played most of the matches at home and just now we have started moving out. If our success rate in the away games is more than 50 per cent, then we will be in good position,” he added.

He added that the bounce on the wicket at this venue will assist the bowlers to a certain extent.

“The wicket is a bit supportive. The bounce is better, so as a medium pacer there is a little bit help,” he said.

Asked about the fitness of senior pacer Zaheer Khan, RP said the bowler has almost recovered but the team management will decide on his return.

“He will definitely play. He has started bowling…almost recovered. Hopefully we can see him soon. I think he had a side strain. Only the team management can let you know when he will play,” RP informed.