Tendulkar, who is in no compulsion to travel with the team, is expected to be with the MI squad in some of the matches.

New Delhi: Sachin Tendulkar may have retired from cricket but he still rules the hearts of fans with chants of ‘Sachin, Sachin’ reverberating once again at the Feroz Shah Kotla as the chief mentor of Mumbai Indians side walked out before the start of the Indian Premier League (IPL) game. Shreyas Iyer, JP Duminy star as Delhi Daredevils score 190/4 against Mumbai Indians in IPL 2015

A year and a half may have passed since the batting legend quit international cricket in an emotional farewell at the Wankhede, but Sachin mania is still alive with fans waiting to catch a glimpse of their hero whenever he is spotted. Wearing the Mumbai Indians colours, Tendulkar, who turns 42 tomorrow, not only looked at ease in his role but also waved to the crowed with his wide grin intact. Live Blog: Delhi Daredevils vs Mumbai Indians, IPL 2015

The Rohit Sharma-led side has not lived up to the expectations of their fans this season but with their top men promising a turnaround soon, the team is looking up to their idol for inspiration. The net sessions yesterday were a treat to watch after Tendulkar walked in to give tips to his batsmen and even today he was not only surrounded by MI players at the ground. Many Delhi boys also came to pay their respects to Tendulkar.

Tendulkar, who is in no compulsion to travel with the team, is expected to be with the MI squad in some of the matches in IPL season eight and Kotla was just too happy to have him today. 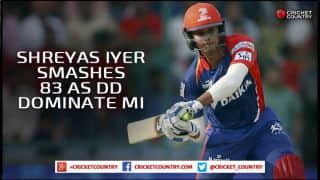 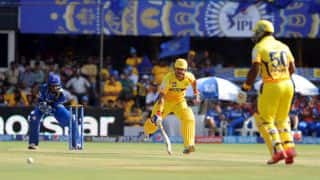