Haseeb Hammed became the youngest opening batsman for England when he played alongside Alastair Cook in the first Test against India at Rajkot.

England s fifth youngest player and the youngest opener Haseeb Hameed made 31 on his debut innings against India , before he was trapped in front by Ravichandran Ashwin in the first innings at Rajkot. He brother Safwan also a cricketer recalled how Hameed was awestruck after watching Sachin Tendulkar play in Mumbai and decided that cricket is going to be his future. Hammed was picked in the England XI in place of Gary Ballance. As a result, Ben Duckett had to drop down to No. 4 in the batting line-up, giving Hammed the opportunity to open the innings along with his skipper and England s all-time leading run-getter Alastair Cook. Full Cricket Scorecard: India vs England 1st Test at Rajkot

There was a sea of people waiting to meet Sachin. That s when Haseeb first got a feel of cricket and the passion for the game in India, Safwan was quoted as saying by Hindustan Times. That s when he decided that cricket is going to be his future. Hameed met Sachin Tendulkar when he was just seven years of age at the MIG Cricket Club in Mumbai in 2004. Hameed s father was born in Mumbai, where the teenager realised how big the game of cricket really is. Hameed had scored 1,129 runs at 52 in the County Championship Division One for Lancashire. He is only the second teenager since 1949 to play Test cricket for England. Hameed was also picked for the Bangladesh Test series, but did not make his debut.

Speaking about Hameed, Cook said, We have all been hugely impressed with the way Haseeb has gone about his business on this tour. Nothing seems to phase him. 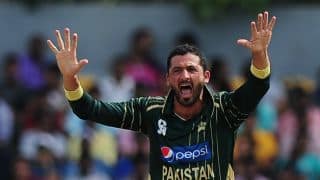