When India had last played Nidahas Trophy in Sri Lanka, Tendulkar and Sourav Ganguly had put on a record 252 runs for the opening wicket against Sri Lanka.

Nidahas is sponsoring a tournament after 20 years. This time it will be contested by India, Sri Lanka and Bangladesh, to mark 70 years of Sri Lanka’s Independence. It will also be a T20 tournament, unlike the 1998 edition, where India, Sri Lanka, and New Zealand played a 50-over triangular series celebrate the 50th anniversary of Sri Lankan Independence. For this special occasion, Sri Lanka Cricket (SLC) have invited Sachin Tendulkar to witness few matches of Nidahas Trophy. However, Tendulkar is yet to confirm the invitation.

When India had last played Nidahas Trophy in Sri Lanka, Tendulkar and Sourav Ganguly had put on a then world record 252 for the opening wicket in the final, against Sri Lanka. It stands today as the seventh-highest opening wicket partnership.

SLC President, Thilanga Sumathipala, gave more idea on the invitation sent to Tendulkar, as reported by Bipin Dani: We have made a special request to Sachin Tendulkar to arrive and witness the few matches. He has a very busy schedule ahead and therefore he is yet to confirm the invitation. Sachin has sent a special greeting and message on the occasion of Sri Lanka s 70-year of independence and SLC celebrating the 70 years of cricket in this nation. We ll ever cherish Sachin s message. 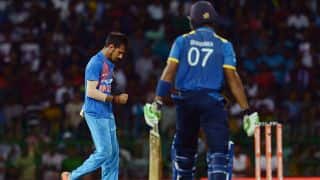