Tendulkar is the only cricketer to have hit 100 international centuries, and the first to score a double century in ODIs.

Dharamsala [India]: Legendary cricketer Sachin Tendulkar, who is on a four-day private visit to Dharamsala, visited Tibetan spiritual leader the Dalai Lama at his adopted home in McLeod Ganj on Thursday. After meeting the Dalai Lama, Tendulkar said that he felt ecstatic to seek the Tibetan leader’s blessing, adding that the duo talked about spreading happiness and communal harmony.

“It was an excellent, very good meeting. I always wanted to be here and take the blessings. Just wanted to spend some time and say hello to him. We talked about spreading happiness and communal harmony,” Tendulkar told reporters. The spiritual leader of the Tibetans lives above the Himachal Pradesh Cricket Association (HPCA) Stadium ground, where Tendulkar will go once again on the final day of his visit.

The former opener, who is accompanied by his wife Anjali, had earlier met young cricketers at the HPCA Stadium. Considered as one of the greatest batsmen of all time, Tendulkar is the highest run scorer of all time in international cricket – having notched up 18,426 ODI runs and 15,921 Test cricket runs.

He is the only cricketer to have hit 100 international centuries, and the first to score a double century in ODIs.

The Mumbaikar received India‘s highest civilian award Bharat Ratna in 2014. He is the youngest recipient to date and the first ever sportsperson to receive the award 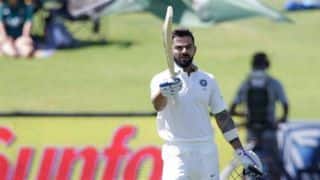 Virat Kohli to join Surrey; will miss Test against Afghanistan