Sachin Tendulkar, Narendra Modi and others wish students good luck before board exams

Sachin Tendulkar, Narendra Modi and others wish students good luck before board exams

New Delhi: Alluding to the presentation of the 2016-17 general budget, Prime Minister Narendra Modi on Sunday observed that he too was to appear for an exam and exhorted students appearing in the coming board examinations to maintain a positive approach. Cricket great Sachin Tendulkar — who along with chess ace Vishwanathan Anand, religious preacher Morari Bapu and renowned scientist C.N.R. Rao were the guest speakers on Modi’s 17th edition of ‘Mann Ki Baat’ aired on All India Radio on Sunday — also exhorted youngsters to maintain a positive approach.

While Anand advised students to stay calm, Rao told them never to give up. However, the prime minister maintained silence on the controversies surrounding the Jawaharlal Nehru University row and Hyderabad University research scholar Rohith Vemula’s suicide, besides other issues that have led to uproar in parliament. “I have to appear for an exam tomorrow (Monday). The 1.25 billion Indians will be taking my exam,” Modi said.

“You must have noticed that I am healthy, confident… tomorrow, I will give my exam, and your exams will start the day after. If we succeed, the country will succeed,” he said. Modi advised students appearing in the board exams to remain positive, and not to come under pressure of expectations of others. “Do not get burdened under the expectations of others. Set your own targets. Why should we compete with others? Why not compete with oneself? Break your own previous record.”

Tendulkar said: “Positive thoughts will be followed by positive results. I would say that you must set a target for yourself and do not come under the pressure of someone else’s expectations. Work hard, but set a realistic achievable target for yourself,” the batting legend said.

“If you stay calm and you are well nourished and have slept well, then you will find that your brain recalls the right answer at the right moment. So stay calm. It is very important not to put too much pressure on yourself,” he said.

Scientist Rao reminded the students of many opportunities available in the country. “Decide what you want to do in life and don’t give it up,” he said. Preacher Morari Bapu, in his message, urged students to concentrate on their exams, and accept the results as and how they come. Modi also suggested to the students to leave enough time in hand so that they do not have to rush to reach the exam centre. He also emphasised on the need for sound sleep.

The Class 12 exams of the Central Board of Secondary Education are scheduled to begin on March 1 and of Class 10 on March 2. 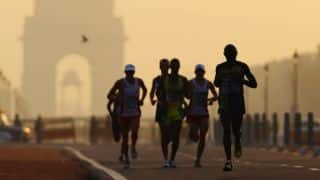