Sachin at present is in USA for the Cricket All Stars League.

New York: Legendary batsman Sachin Tendulkar feels cricket might be the second most popular sport in the world but in order to make it a global sport more countries need to play in the game’s showpiece event, the ICC World Cup. Tendulkar, who is here along with Australian spin legend Shane Warne for the inaugural ‘Cricket All Stars 2015’, a three-city Twenty20 rubber involving retired stars of the game, said the idea behind the series is not only to popularise the game in the US but to globalise it as there is a need to have more countries taking up the sport competitively. “People have opinions that there should be less teams. VIDEO: Sachin Tendulkar, Shane Warne visit Citi Field, New York ahead of 1st All Stars match

But we need to find a solution and work towards it together to make cricket a global sport and not have just 8-12 countries compete all the time and be happy with that,” the Indian cricket legend said here yesterday.

“From the time of the first World Cup in 1975 till now, there are only 9-12 teams that compete for the Cup. If we don’t take steps toward that (globalising the sport) it is never going to happen,” he said.

Just like his batting, Tendulkar responded in elegant fashion to former Australia captain Ian Chappell’s recent comments that retirement means the end of a career and people would not want to watch retired players in the Twenty20 exhibition series to be played in New York, Houston and Los Angeles. 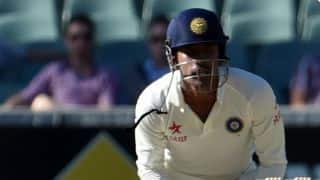