India bating mainstay Rahul Dravid, who will lead the Rajasthan Royals in the upcoming Indian Premier League 5, felt that having shared the dressing room with Sachin Tendulkar, he can vouch that the champion batsman was not solely focused on getting his 100th international ton. 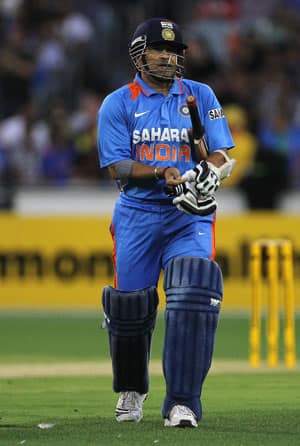 India bating mainstay Rahul Dravid, who will lead the Rajasthan Royals in the upcoming Indian Premier League 5, felt that having shared the dressing room with Sachin Tendulkar, he can vouch that the champion batsman was not solely focused on getting his 100th international ton.

“Having shared the dressing room with Sachin, I don’t think Sachin himself is thinking about it (scoring the 100th century).

“Every time a batsman wants to go out and score a century to help the team to win. It (the 100th ton) will happen,” said Dravid after the Royals announced Ultratech Cement as the team’s main sponsor for IPL 5.

“There will be a bit of controversy and you expect that in a professional sport and you know that each and every performance of yours is watched and analysed…you accept that and it’s a part and parcel of being a sportsman. When you do well it pays and gives you a lot of love and affection, and sometimes there is a flip-side as well.”

The 39-year-old Bangalore stalwart was responding to a query about the criticism in the Australian media about the seniors’ performance and Tendulkar’s long-awaited landmark.

About his own decision to accept captaincy of the Royals outfit after the departure of Shane Warne, Dravid said he had put in one year’s stint with the Jaipur franchise, and had come to know his teammates, owners; it was an easy decision to make.

“It’s a totally different scenario (from the international level) — it’s a combination of domestic and international players and I am looking forward to it. I really enjoyed my year in Rajasthan Royals and we have a good bunch of players, so from that point of view it was an easy decision when it was put forward to me.”

Dravid had stepped down from the national captaincy in September 2007, saying he was not enjoying the job anymore.

Dravid, who has scored over 24,000 runs in the international cricket with 48 hundreds, said the Royals had a good bunch of players this time, and, with some luck, should get into the top four before the knock-out phase.

“We have good players in the team and had to fill in a couple of players which we have taken from the auction. We need to perform well and hope luck favours us this time and we are in a position to enter the last four stage. After that there is a knockout stage and anything can happen here,” said Dravid, who was with Royal Challengers Bangalore in the first three seasons of IPL.

He added that it was important to start the tournament well and get some momentum.

“It will be about playing good cricket, we have a good balance of players and we have to ensure that we gel together and how you bring different players from different countries ? young and old. There is not a lot of time, everyone will be arriving two-three days prior to the tournament. This is the way international schedules work nowadays.

“It will be a challenge for the management on how to get the team together and run the strategies and group. That is going to be the key and we have to start well, that gives you the momentum and keeps you going through the tournament.”

Team’s co-owner and Bollywood star Shilpa Shetty-Kundra said the team would miss Warne, but was looking forward to Dravid leading the team this season.

“We will miss Warney. But he will be always there in spirit. We are thankful to the legend Dravid who has agreed to lead the team even as we say good bye to Warne,” she said.

Former India captain was all praise for Virat Kohli but asked Gautam Gambhir not to feel left out of the squad as his Delhi mate is appointed as MS Dhoni’s deputy for the Asia Cup.

Although Dravid felt that Kohli had been rewarded for his splendid display in Australia, he said that the former India under-19 captain still had some way to go to establish himself and go a step further.

“He (Kohli) has had a great tour of Australia. He has done incredibly well in Tests and in the ODIs….the selectors have given him a bit of reward,” said Dravid.

“Having said that, Virat is the first to recognise that he has got to establish himself to go another step further. I think we know from the past that by just being the vice-captain you are not going to be the next captain.

“It’s a good recognition for his form; I feel people like Gautam shouldn’t feel left out from the team. But at the moment Dhoni is doing a good job, so you don’t need to look anywhere else,” Dravid further added at a function to unveil Rajasthan Royals’ team jersey ahead of the IPL 5.