The academy's target group would comprise of 9-14 year old children. The academy will also provide opportunities for talented underprivileged children through 100 scholarships.

Merchant Taylor’s School in Northwood will host the first camp for the trainees from August 6-9. Subsequently, more camps would be organized in Mumbai and London.

“The academy will provide young girls and boys between the age of 9 and 14 an opportunity to learn from two of the most respected and renowned institutions in world cricket – Sachin Tendulkar and Middlesex Cricket,” read a joint statement. “The comprehensive training curriculum developed by the professional coaches at Middlesex and the Master himself will help young and budding cricketers with various aspects of cricket, including insights into athletic development, sport psychology, tactical development and technical modifications. With talent identification at the core of the academy, TMGA will also provide opportunities for talented underprivileged children with 100 scholarships available.”

Tendulkar, regarded as one of the greatest batsmen of all time having accrued the most runs in international cricket, said the ambition for the academy was two-fold. “The objective is not only to produce good cricketers, but also good global citizens,” Tendulkar said. “Middlesex and I are focused on providing the very best in cricket education, as much as possible, for our students,” he added.

Middlesex chief executive Richard Goatley said it had been “a great privilege” to work on delivering the academy with Tendulkar. “Our established academy programme, twinned with Sachin’s unique insight, knowledge and ability will provide kids with a unique experience they will never forget,” he said.

Tendulkar came through the ranks from a disciplined school cricket structure in Mumbai under the tutelage of veteran coach, Ramakant Achrekar while studying at Sharadashram Vidyamandir. The collaboration between school, academies and clubs has played a vital role in the growth of Mumbai cricket through the years. It makes sense for the maestro to now focus part of his energies on grooming young talent himself through the Tendulkar Middlesex Global Academy. 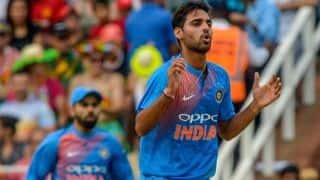