Tendulkar scoffed at England's chances in the World Cup.

Indian batting legend Sachin Tendulkar has predicted India, South Africa, New Zealand and Australia to be the semifinalists of the ICC World Cup 2015 next year. Meanwhile, judging England on their current form, the ‘Master Blaster ‘ has scoffed of their chances of winning the 2015 World Cup.

After 24 years at the sharp end, Tendulkar quit the game as a reigning World Cup winner last year and he reckons England have got no hope in following his efforts in 2011 after watching them get beat up this summer, losing their fifth out of six ODI series, The Mirror reported.

Tendulkar said that at the World Cup he thinks Australia, South Africa, New Zealand is a dark horse, India these four should be his semifinalists. He added that he doesn’t really thinks so that England would be there. He said that anything is possible in this sport but going on current form he does not think England would be that competitive.

One man who might make a difference is Moeen Ali, who was given an ugly reception by Indian fans at Edgbaston earlier this year much to Tendulkar’s disgust. At the launch of his book, ‘Playing It My Way’, Tendulkar also said that he thinks that should not happen, and added that people have come to watch good cricket and he strongly believes they should enjoy cricket rather than engage themselves in these activities. 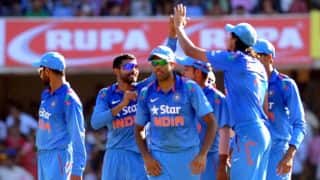